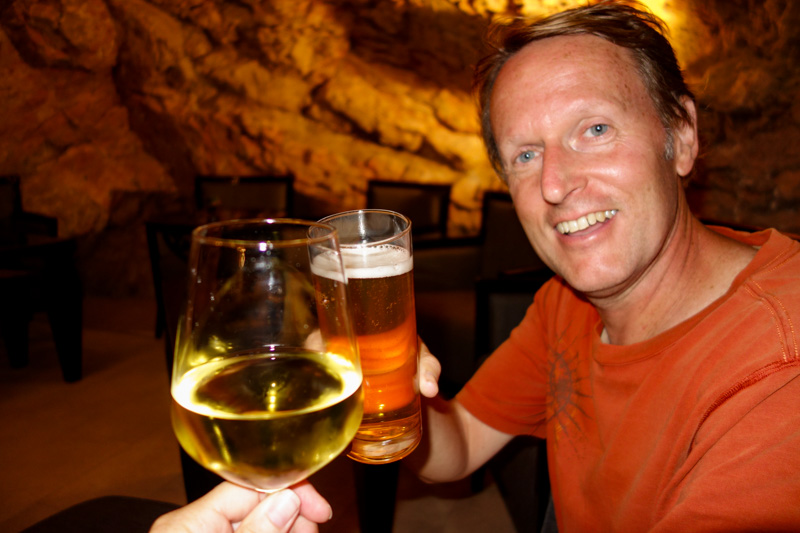 Having grown up during the microbrew revolution in the US that began in the 1980s and continues to this day, I have a fondness for good beer.  I enjoy trying new varieties, new brands, new flavors, new concoctions, new…ah, heck, I just enjoy beer.

Fortunately for the world (and me), Northern Europeans have been brewing beer for centuries, so they know what they are doing.  You can find excellent beer all across the northern countries, where it is considered a staple food item.

The best part is that being such an integral part of the culture, it is priced very reasonably, so a budget-minded beer aficionado-connoisseur-dilettante like me can take full advantage of the offerings. 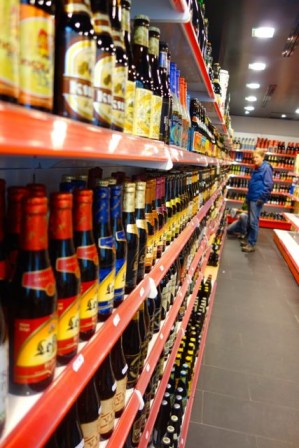 Awed by beer selection in the supermarket aisle in Bruges, Belgium

Our adventurous suds-sopping took place primarily in four countries where there is a strong beer culture: the Czech Republic, Hungary, Germany, Belgium, and the Netherlands.  Here, beer takes on a religious quality, where some brands are still produced in monasteries.

You can find beer in the rest of Europe, certainly, but there seems little of the palette or variety found up North.  In the countries around the Mediterranean, it is mass-produced pilsners or lagers that make up most of the selection, with the odd mass-produced import available as an alternative.  While some are pretty good, they are nothing to write home about.

Up north however, the Saxon beer expertise finds expression in the full range of styles from the lightest of wheat beers to the darkest of stouts and reaches its pinnacle in Belgium, where the brews are so thick and rich you wonder if it might be food.

When we arrived in the Czech Republic after making our way north from Greece through the Balkans, suddenly, there was brown beer on the menu.  This could mean anything from a red ale to a stout, but it was a nice alternative to pilsners.  The Czechs are proud of their beer heritage, and there is a burgeoning microbrew culture working to broaden it. 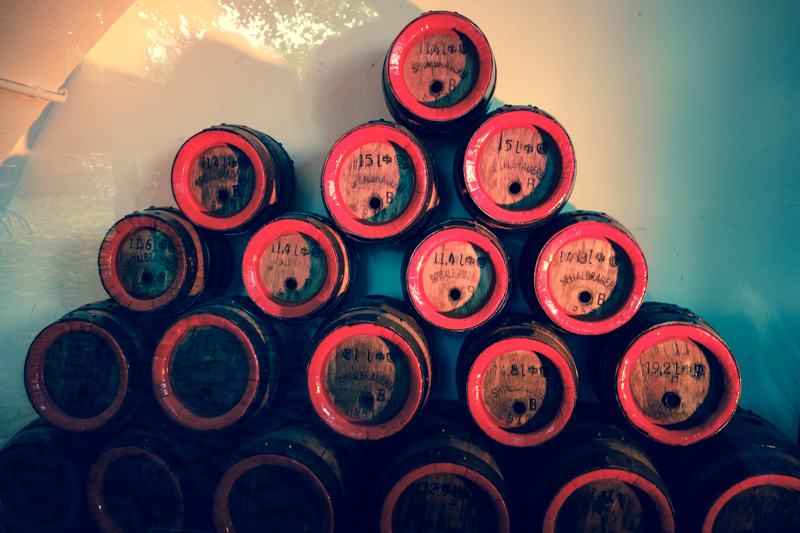 Next we ventured west to Bavaria to visit a series of small villages frozen in time.  Bavaria is the beer capital of Germany with a dense collection of breweries through a small band of the country.  This is wonderful as each new village has their local brew on tap and most are really good.  One of the more unique things we experienced was smoked beer found exclusively in the city Bamburg, which is made by fumigating the roasting grains and malt with smoke.  This is great paired with roasted meats as you might imagine, and I kept imaging the many ways you could cook with it. 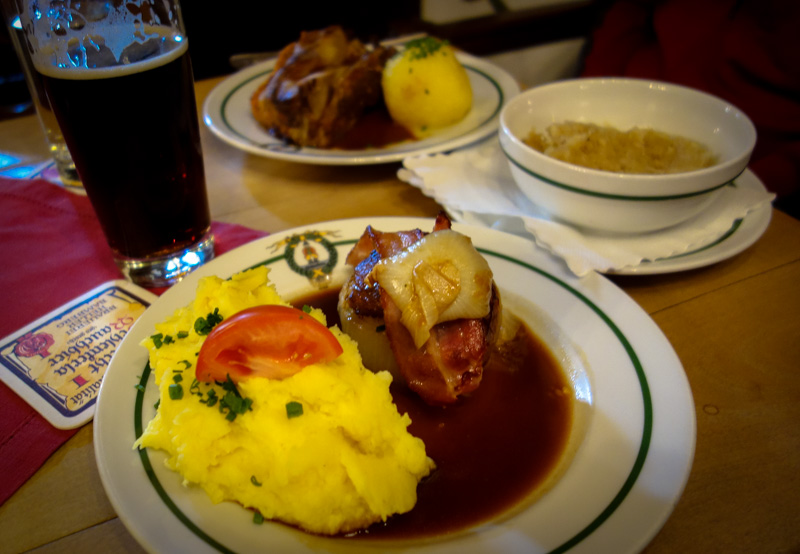 Our next destination was the Netherlands where again we found a thriving beer culture.  While this is the land that brought you Heinekein, it has a lot more to offer the beer lover.

The best evidence of this is the Brown Cafe culture.  Imagine a Starbucks hang-out kind of atmosphere but centered around beer instead of coffee and that is the Brown Cafe.   Brown Cafes have an assortment of styles from the lightest wheats (look for Blanche de Naamer, a best wheat in the world winner and so light it looks like lemonade) to the darkest, thickest stouts. 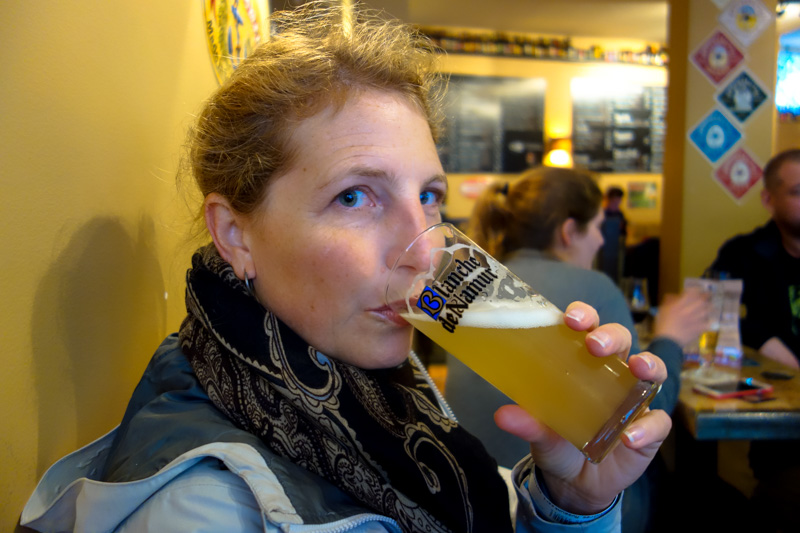 A particular favorite establishment of my wife and mine is Cafe Gollem, with four locations in Amsterdam. Each Cafe Gollem has at least 15 beers on tap, usually from small local breweries in the Netherlands and Belgium, and then at least 100 more bottled beers from across Europe and America.  The best part is the most expensive beers were only about $5, so you can sample a couple without breaking the bank.  If you are in Amsterdam, don’t miss Cafe Gollem. 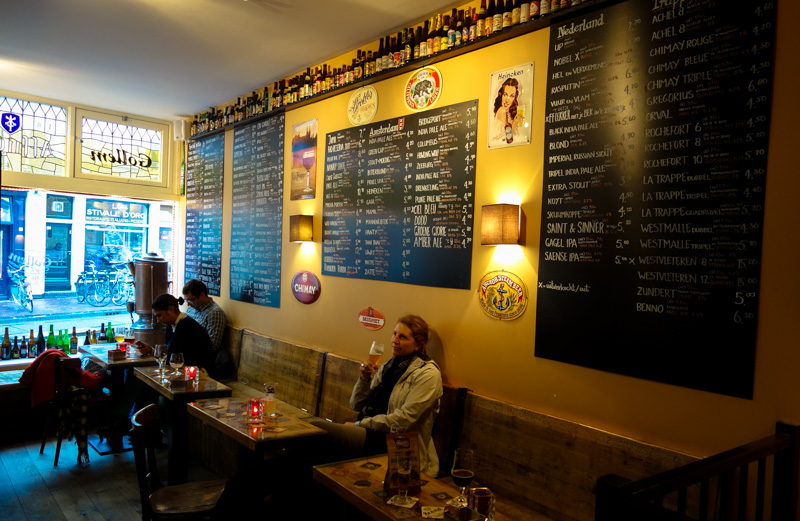 There are also a variety of specialty beer stores that have dizzying array of malt beverages and expert staff to help recommend some special treats.  However, even the local supermarket usually has a few great options, so you can always pick-up a tasty brew to go with or in dinner.

Beer reaches its celestial apex in Belgium. Here, the best beers are produced in monasteries or in association with them, and they are truly divine.  The beer-making traditions of the Trappist monks in this country  produce an amber liquid that is the nectar of the gods.

This malty goodness is sometimes dubble, tripel, or even quadrupel fermented to produce beers that taste thick on the tongue for all their flavor but slide smoothly down the palette to produce a warm glow from within.

There are only seven true monastic breweries turning out beers made by actual monks, but a lot of other monasteries have partnered with local breweries to share their centuries-old, malt fermenting wisdom so that it can be enjoyed by the world. 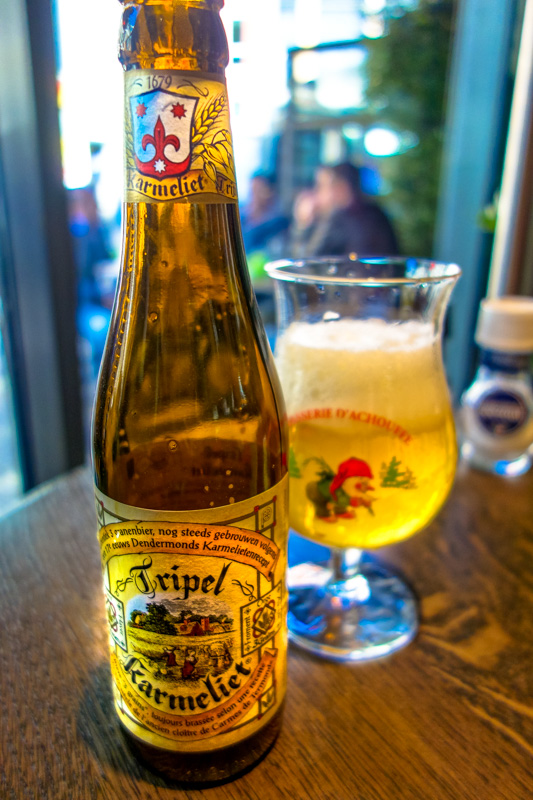 Tripel Karmeliet is fermented three times in a Carmelite monastery

During the summer and early fall, you can visit breweries across the country and take brewery tours.  However, many stores and restaurants serve the local specialties so you can sample them most anywhere.

If you are interested in seeking out more information on beer culture and locals in Europe, there are some resources on the internet worth checking out.  One that helped me was the European Beer Guide , which has information from across the continent.  More regional guides to beer are also available.  For the beers of the Bavarian Region, the Good Beer Guide to Southwest Germany is a good resource.  For Belgium, visit beertourism.com.

By investing a little time in some research, you can create your own beer experience that can be appended onto your European tour.  I found a variety of resources online that can help you find out more about Northern European beer culture.

My recommendation? Crack open a frosty cold one, sit down in front of your computer, and start crafting your beer bucket list.

“Our father, who art in heaven, hallowed be thy brew, thy kingdom come, thy beer be drunk, on earth as it is in heaven.” AMEN. 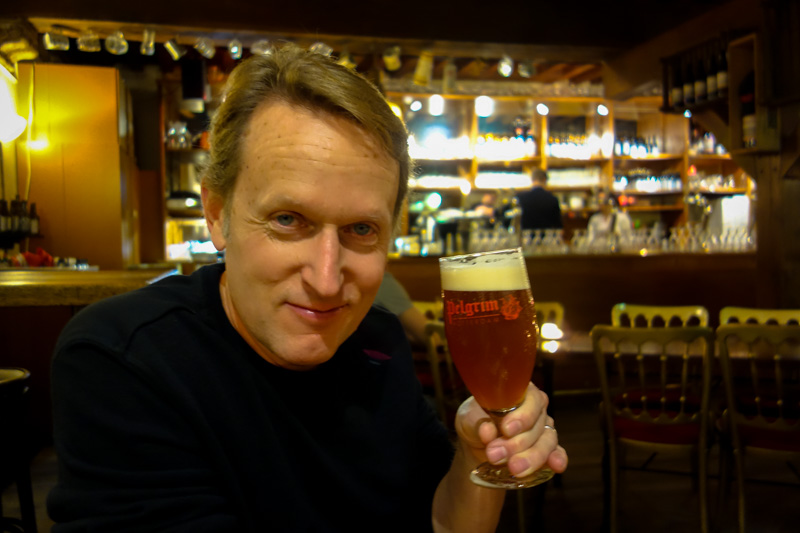 Beer lovin’ at the Pilgrim in Rotterdam, Netherlands

-written by Aaron, photographed by Tammy and Aaron

European Visas: What is the Schengen and How Does it Work?
January 22, 2016
Go to Top