Traveling on the Other Side of the Tracks: Morocco Two Ways 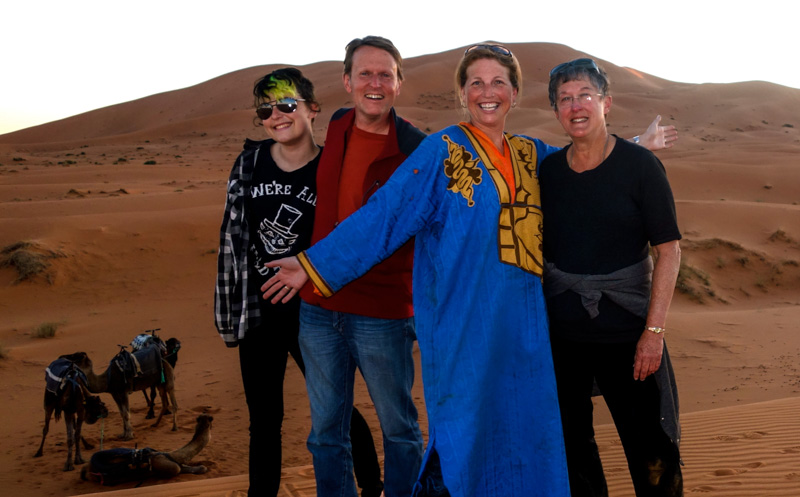 Our past journeys, lasting between 2 weeks to 14 months, were characterized by big adventures on a fairly tight budget.  This journey is no exception: we saved our money and continue to find creative ways to extend our time in global locations on the cheap.  This time, our journey differs in that we bought our own motorhome and have lived well if not humbly in campgrounds throughout Europe and Morocco.

We encouraged our closest family and friends to come meet us somewhere along our path and have been delighted at the response: our very first visitor was Aaron’s mom Susan (aka Grammy Sue) who agreed in the fall of 2014 that she really wanted to see Morocco. 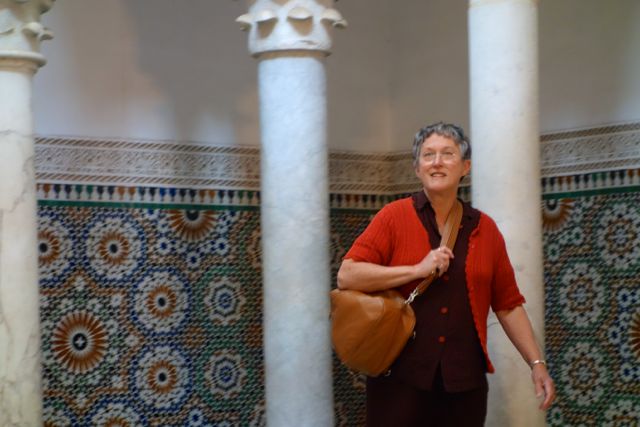 Grammy Sue was a bit nervous at coming to such an “exotic” place, and wanted to know if we would like to join her for part of her visit on a pre-arranged tour so that she could pamper us and also have the comforts the tour offered.  Although we’ve never done anything like that before, we jumped at the chance for this new experience!  A previous journey of Southern Africa with the exclusive tour company Abercrombie & Kent inspired Grammy to gift us with an 11-day circuit of the Imperial Cities and the Desert of Morocco with the same company.

ONE SIDE OF THE TRACKS

We picked her up at the Rabat-Sale airport in February 2015, and with two weeks before our tour began, we headed south to the sunny locations of Agadir and Essaouira that weren’t on our itinerary with A & K.  Being from Alaska, Grammy loved getting some sunshine.  In those first weeks she learned our strategies on how live harmoniously with four people in under 100 square feet as she eased into Moroccan culture.  She readily did the dishes by hand, tolerated Moroccan plumbing in the campground facilities, and helped with the daily chores of living on the cheap. 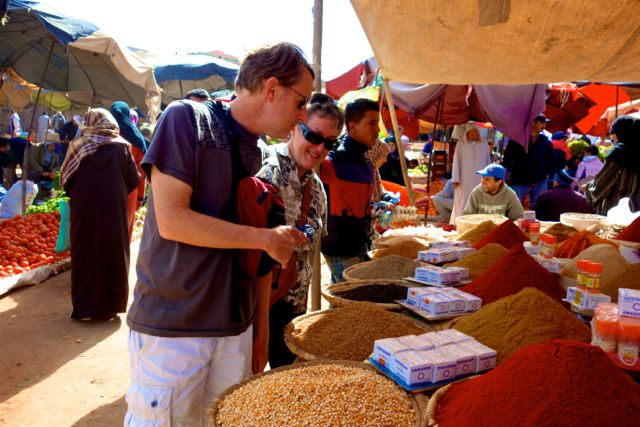 When we arrived at the Hyatt Regency in Casablanca we were grateful that A & K had made arrangements to safely store Charlie in the secure underground parking under the mammoth Hassan II Mosque!  Our first night was filled with excitement and pampering.  I luxuriated in the first bath I’ve had in months and we all dressed up for dinner.  Our decision to dine in the Moroccan restaurant in the hotel was easy – we already felt like experts in navigating a Moroccan menu and knew what we’d like Grammy to try.  The dining hall was decorated like the interior of a pasha’s tent: we chose low sofas around a round table nearby two loudly spoken American businessmen, the only other diners.  Our meal was adequate, but missing the depth of flavor and quality we had been experiencing throughout the country at smaller, local restaurants.

The evening was topped off by two musicians, one playing a stringed oud-like instruments and the other an Egyptian doumbek drum.  I felt like this beginning of the tour was a sterilized version of Morocco and hoped that our guide would help us understand the country we had been experiencing rather than show us a Disney-fied version of his authentically colorful culture.

The next morning, we were greeted by an A & K representative and we met our guide Lazrak and driver Hakim.  As our private six-seater Mercedes van took off, we all felt like VIPs and Aaron expressed his relief to not be driving in the Casablanca traffic.  We had been wondering for weeks what the tour would be like and our guide and if he or she would be able to tolerate and answer the hundreds of questions about Morocco we’d gathered over the past two months. 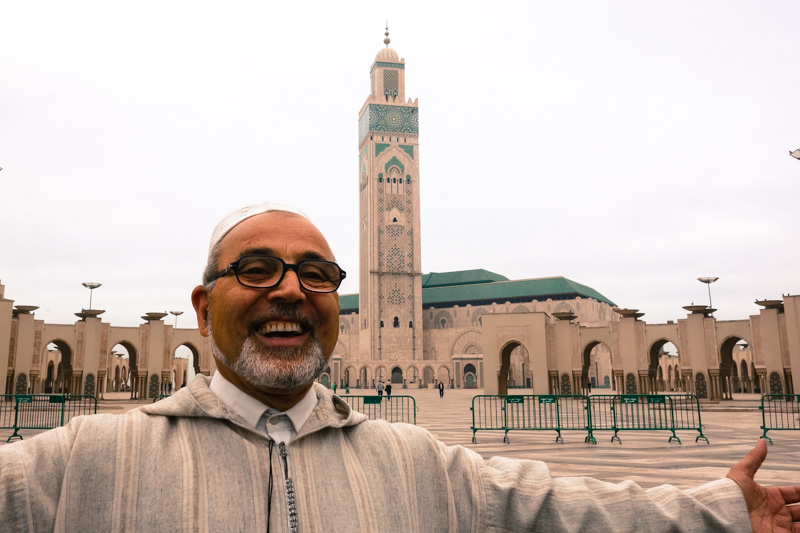 What we had no idea of was the transformative quality of the tour.  We really had no idea that we would walk away 10 days later with a deep understanding of Moroccan culture and would feel like we had been to an intense University course of which we should be bestowed a new degree.

Our tour of Casablanca took us to the grand Hassan II mosque, an old Jewish synagogue, and a Christian church.   This auspicious beginning led us next to the ancient capital city of Rabat where we enjoyed wandering the blue and white painted medina (old walled city) and the remains of a medieval minaret (tower of a mosque) and newer mausoleum honoring the current king’s father and grandfather.

A three hour journey northeast took us to the first of three nights in the Imperial City of Fez staying in the former 19th century palace Palais Faraj . . . the most palatial hotel we’ve ever stayed!  Mali and Grammy were roomies in a two bed and three bath suite and Aaron and I had our own amazing suite decked out with mosaics, carved plaster, and a bathroom the size of Charlie.

We spent the next several days awed by the 9,000+ alleys that make up the Fez medina, enjoying a traditional public bath called a hammam, dining with our guide and his family in their family riad (home turned into a boutique hotel), touring the neighboring Imperial City of Meknes, and checking out the Roman ruins of Volubilis.  Whew! 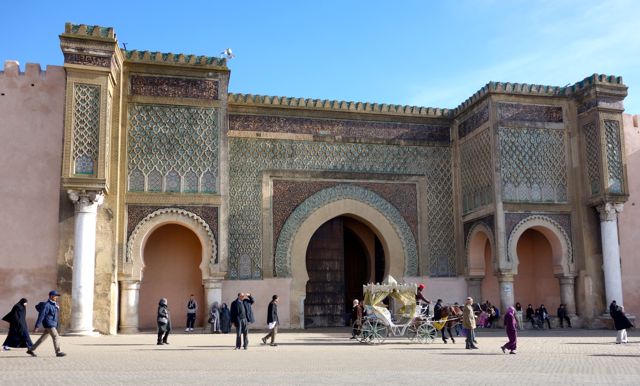 Yet another incredible gate surrounding the city of Meknes

We would have enjoyed a few more days luxuriating in the Palais Faraj, but the Sahara beckoned.  We learned to keep up with Lazrak as his steady but fast pace through the medina soon left the shorter-legged followers behind.  Luckily for us, he was frequently stopped by acquaintances of every station of life: merchants, businessmen, tourists, and VIPs alike would heartily greet our gregarious guide with handshakes, kisses, and hugs of familiarity which moved us to give him the moniker “Mayor of Fez”.

His proclivity to press a few dirham coins into the hands of those clearly in need became a point of discussion and showed us his heart and devotion to his belief system.

The longest leg in the van took us through the High Atlas mountain range to the edge of the Sahara desert.  The next morning we started with a visit to a fossil factory with the most amazing collections of ammonites, trilobites, crinoids, and orthoceras.  After transferring to two 4 wheel drive SUVs, we went and searched for fossils in the rocky pre-Saharan desert.  Our guides showed us the biggest orthoceras in-situ, then we proceeded to pick up small ammonites and orthoceras by the handful!  As a geologist, Grammy was in a rocky paradise. 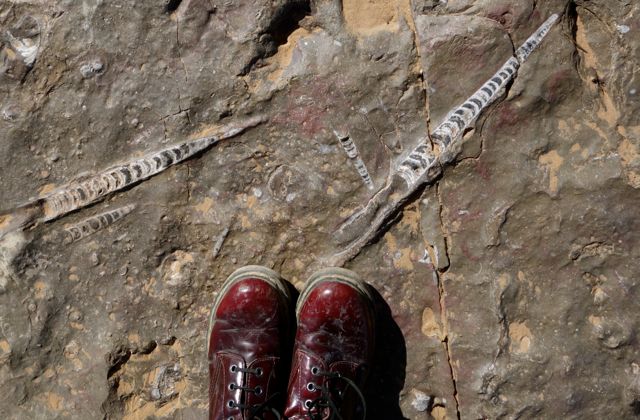 Standing in a desert filled with the remains of an ancient seabed – giant orthoceras embedded in situ and ammonites picked up by the handful!

The SUVs sped across the edge of the desert stopping by a lonesome Berber tent. Mali fell in love with a two day old goat kid, we watched a grandmother spin camel wool, and partook in the ubiquitous mint tea while enjoying the shy company of the daughter-in-law hostess.  Our destination was Madu Camp in Erg Chebbi, one of two giant dunes in the Moroccan Sahara.  Our camel caravan plodded for several hours across the dunes to watch the sunset, returning for an amazing dinner miraculously prepared in a city of sand.  The day was capped off by an evening of drumming and dancing with our Berber brothers.  Waking to the sunrise on the Sahara with the hills of Algeria in the distance was an experience I’ll never forget. 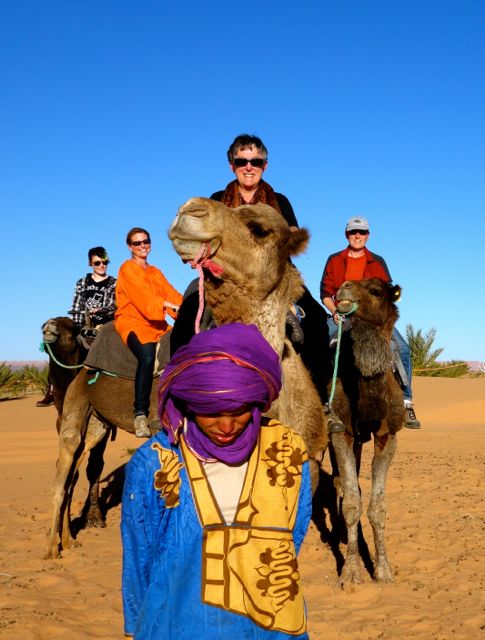 The next several days took us to the kasbahs (old mud-walled towns) of Ourzazate, the picturesque Ait Benhaddou kasbah that has been the setting of many films, and the terrifyingly sharp hairpin curves of the one-and-a-half lane highway over the Tizi Tichka pass in the High Atlas passing over-wide buses and top-heavy trucks.  Thank goodness Hakim is a professional driver!  Our arrival in Marrakech and the swanky Four Seasons Resort was welcome.  Lazrak introduced us to the country’s central souqs/markets (over 9,000 vendors in the old city alone), palaces, and gardens.  Worn out from this whirlwind tour, we all voted for our last day to laze poolside. 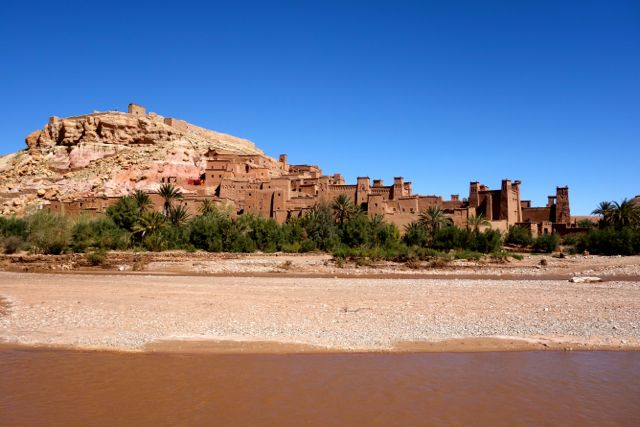 The famous Ait Benhaddou has been used in many movies

Aaron and I have chosen this nomadic and humble life we live and are very happy wandering the globe, but I have to admit that the 11 days of pampered living in posh hotels with reliable plumbing, excellent food, and plenty of elbow room was a lovely respite.  We live for our spontaneous exploration of places yet sometimes I come away without a deep understanding of what I’ve experienced and I feel I’ve missed something important in the lack of translating the culture around me.  With Lazrak as our guide, I felt we experienced very intentional, if not directed learning from a masterful guide (he’s been a professional guide for 35 years).  He stated his goal for us was to deepen our understanding of Moroccan culture so that we had context for our everyday immersion.  Now, months later and time to process the learning, I believe he achieved his goal. 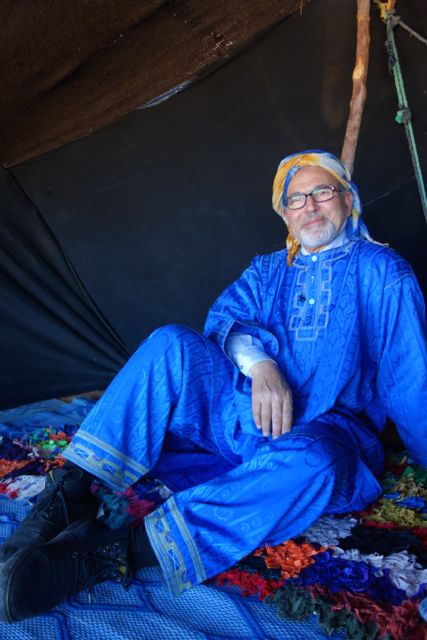 Guide and friend Lazrak hanging in a Berber tent

The A & K tour was high paced with a proscribed agenda, yet Lazrak and Hakim were able to personalize our pace and tailor more to our interests.  They were sure to include a variety of experiences with food both “street” and high cultured which resulted in a much better understanding of the economy, industry, and family life of Morocco.  Lazrak speaks eight languages and was able to give the etymology and context for dozens of words he taught us in Moroccan Arabic.

The most important and meaningful highlight of our tour with Abercrombie & Kent was the most unexpected: that of the relationships we formed.

Our driver Hakim was the quiet and bemused bystander for many of our lectures and banter, but the trust we built in him as he skillfully transported us throughout his country manifest in our departure when he gave us his cell number with a huge hug and told us if we needed anything, anything at all, to give him a call.  I will never forget Lazrak and his old school manners caring for Grammy, sharing his beautiful family with ours, and his wealth of knowledge.  Did he answer our questions?  Mostly yes, but he also gifted us with answers to questions we didn’t know we had before.

Grammy’s gift to us of the tour and our gift to her of sharing our life on the road left us with unique impressions of Morocco (check out Grammy Sue’s impressions).  Encountering the country “two ways” offered us rich unforgettable experiences.  While we were wakened by the same roosters, dogs, and muezzin call to prayer in the hotel as we do in the campgrounds, it was worth it to wake up on the other side of the tracks for a change.

-written by Tammy, photography by Mali, Tammy, and Lazrak

European Visas: What is the Schengen and How Does it Work?
January 22, 2016
Go to Top