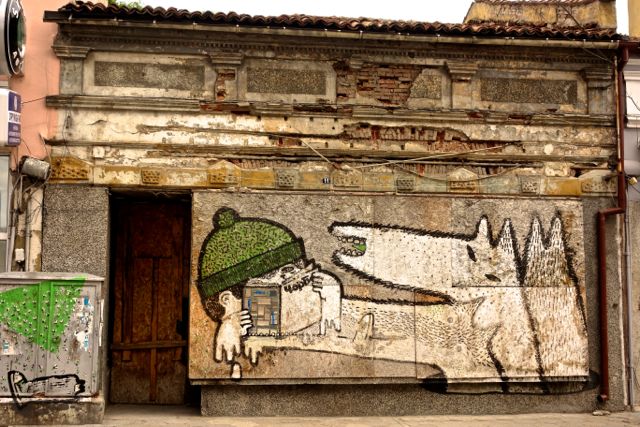 One of the best parts of traveling without a firm itinerary is stumbling upon unexpected places that challenge any previously-held conceptions we might have had. Most recently, we were enjoying ourselves in Turkey and trying to decide where to go next. In one direction, we could head south towards the sunny beaches and ancient Lycian way of the South Aegean. Or, as we were already in Istanbul and along the Bosphorus Straight, we could head eastward along the Black Sea towards the country of Georgia of which we had heard from other travelers was both untouched and beautiful. Or, we could head up towards Albania and explore the beaches and discover the antiquities the ancient Romans had left behind.

However, our inner compasses compelled us to head northwards instead towards the Balkan country of Bulgaria which we knew little about but were open to the possibilities that lands remote beget.

If I had been asked a year ago about what I thought I knew about the Balkans, I would have told you some of the stereotypical nuggets that this American has nurtured about former Communist nations: smoggy dirty warehouse-inspired industrial towns with vast agricultural plains hand-tilled by peasants with a few mountainous areas and over-run beaches for the few privileged vacationers. Bleak, eh?

In the last ten months in our travels we heard even more stereotypes about Bulgarians: that they are all “Gypsies” (a derogatory term for the Roma peoples of Europe) that rob people, that they are too corrupt a people to offer the European Union much value, and the people’s affect is gruff and dislikable. Additionally, the night before we were to cross the border, a couple from Austria informed us that the Bulgarian roads were impassable due to their degraded state.

Aaron and I travel with the ethos that we educate ourselves about a country beforehand enough to get by, but that we form our own opinions about a culture and it’s people based on our own experiences.

Our openness to new experiences has been the catalyst for inner growth.

Leaving Turkey, a country with which I am very comfortable and which I find fascinating, was only made better by the understanding that we were entering what I consider “lands remote”; that is, a place that seems exotic by its very name and by the lack of familiarity I have with it. Bulgaria fits this ticket as a “lands remote”, so surely an adventure was to ensue.

We are very pleased to report that we did not encounter any of these stereotypes about Bulgarians, and that in fact, Bulgaria is a country with amazing natural environments, kind friendly people, and we even found the roads to be better than many other places we’ve traveled.  This was our experience . . .

The day we crossed the border in a remote part of Thrace (northwestern Turkey) was a beautiful spring-crossing-into-summer day.  Climbing the forested hills became increasingly more breathtaking as we passed the small back-country border.  The road was windy with a few pot-holes belying the earlier report of dangerous conditions.  To our delight, a few kilometers over the border we had to brake for a gigantic mama pig with her 12 piglets in tow. This unusual yet charming “welcome” became a symbol for the unexpected (and bizarre) and set the stage for the rest of our Bulgarian journey. Our first stop was a beach near Sozopol which boasts ancient ruins as the oldest town on the Black Sea. Our campground proprietor spoke excellent English and conveyed how his people were preparing for the expected hordes of Ukrainian, German, and Balkan tourists that stream to this lovely beach town over the summer. He was chatty and shared his story of how he had been to America many times as the godfather to Jean Claude van Damme’s oldest son.

This somewhat wacky encounter epitomized our meetings with locals over the next weeks: we discovered friendly, educated Bulgarians with fascinating stories that dispelled the myths that are portrayed about their country.  Despite the stereotype of “Gypsies”, the Roma ethnicity comprise about 4% of Bulgarians, Turks about 9%, 9% of other nationalities, and ethnic Bulgarians the rest of the population.  We heard the population is dwindling with a “brain drain” to other European nations, hence the low tax base and poorer infrastructure.

Our trips into Sozopol were testament to the local reports of excellent seafood, charming architecture, and fascinating history.  Wandering through town led us to the tip of the peninsula where we stumbled upon an on-going archeological dig. While the workers were obviously out to lunch, the site was wide open without barriers. We walked the rim of this ancient basilica and after a double-take we saw two full skeletons in-situ next to a bag of bones!

Wondering about the significance of what we were seeing, we visited the archeological museum but alas, all the information was in Cyrillic writing of which we cannot even begin to decipher.  We did find out that some bodily relics of St. John the Baptist (known as St. Ivan in Eastern Orthodoxy) are thought to be buried on the nearby island.  National Geographic has done some scientific studies that confirm this possibility. Our next stop in Bulgaria was to the town of Veliko Tarnovo. We had read that it was significant as the seat of the second Bulgarian Kingdom, but little did we know that we would find a wee paradise.

Crossing the rolling hills that form the “spine” of the country, sandwiched between two significant mountain ranges, we drove through major agricultural areas outfitted with modern equipment and methods.  Our first sighting of Veliko Tarnovo was that of high rocky karsts with medieval half-timbered houses hanging off the hillsides. Our impressions of the crumbling ancient Tsarevets Fortress and the antiquities in the archeological museum were strengthened by a free tour focusing on modern street art which gave us greater understanding of older Bulgarian history juxtaposed to current history-making as expressed by its people.  I found myself seeing this sanctioned street art with new eyes and perceiving a new Bulgarian generation as modern and critical of the status quo.

While the Yantra River has carved out three significant peninsulas that form the important town, we followed the river 8 km north following home-made signs marked with a tent to an unexpected paradise called Trinity Rocks Farm. The owner Cliff is an English expatriate who runs the friendliest and most peaceful campground we have experienced to date.

The quiet of the slow-moving river is only interrupted by the orchestra of frogs, while the beauty of the abundant dragonflies (bright blue with black wings, and iridescent green with pinkish lace wings) is only surpassed by the magic of the dusk-time fireflies.

On Sunday afternoon, many Bulgarian families arrived for picnics along the river; their guitar playing, cajone drumming, and singing made me nostalgic for our music-making nights back home. The highlight of our time at Trinity Rocks Farm was participating in throwing a birthday party for one of the visitors – a truly international crowd filled the outdoor dining table while Aaron made salads and grilled and everyone enjoyed each other until the early hours of the morning. Finally, our Bulgarian adventure took us into the southerly Rila Mountains, home to the most spiritual place in Bulgaria, the Rila Monastery, and then on to Melnik, an area that has been making wine for thousands (yes, thousands!) of years. The monastery, which is still in use today, is a large, Eastern Orthodox complex that surrounds an 11th Century church found high in the mountains along a raging river.  The drive and our campsite were stunning as were the icons and the unique church interior. We didn’t have any expectations about the monastery, yet we both expressed how happy we were to be in such natural beauty and learn more about the monastery’s role in preserving Bulgarian culture through the 500 year Ottoman “yoke”. Melnik is considered the smallest town in Bulgaria (not sure how it got that distinction) but it is as big in character as it is in the excellent wine it produces. An impromptu encounter with several locals gave us an education about grapes new to us, including Melnik 55 which is a full-bodied grape similar to Cabernet, and Gamza which has a smooth and smoky flavor. We took the opportunity to re-fill our garage cellar with excellent wines and our minds with a new-found appreciation of Bulgarian viticulture. Bulgaria is a beautiful country with friendly people and one which we hope to visit again soon, maybe during ski season to take advantage of its top tier resorts. Our adventure reaffirmed that it is imperative to travel with an open mind and if you have a flexible mind-set your experiences may well dispel the negative stereotypes that build barriers rather than bridges between cultures. We had the vaguest of expectations beforehand, but being open to the possibilities helped us discover the fascinating reality that is modern Bulgaria.