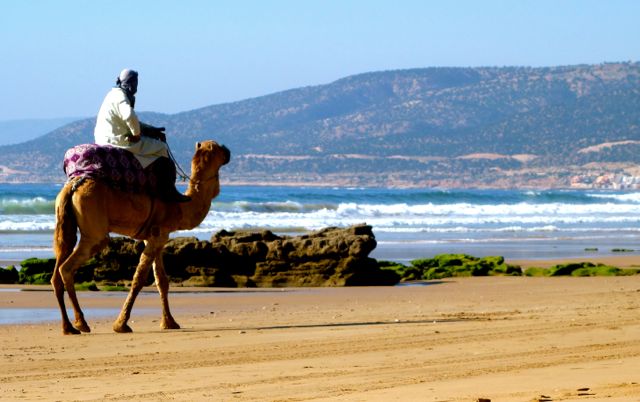 Images of camels crossing sandy deserts came to mind when I thought about Morocco before visiting this magnificent country: the reality has superseded this stereotype! 40% of the Morocco is covered in the Saharan desert or flat rocky pre-Saharan called the hammada, 28% is covered in plains, 20% is farmland, and 12% is forested; however, the unique flora and fauna of Morocco has come as a wonderful surprise. 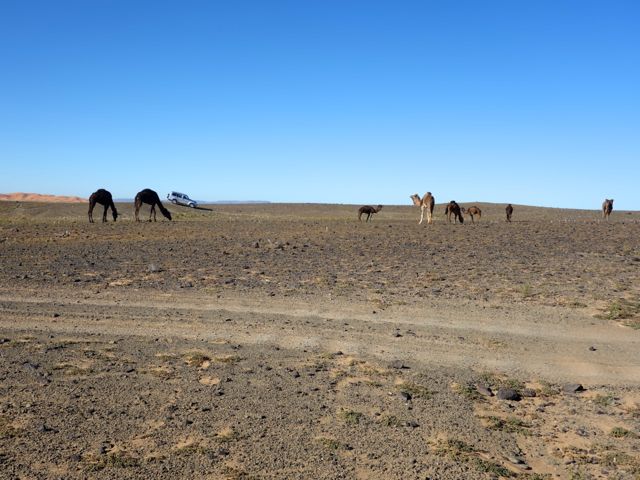 Morocco has a huge agricultural base and feeds it’s people on many fresh fruits and vegetables including the familiar olives, lemons, oranges, artichokes, beans, apples, tomatoes, figs, apricots, and a few unique ones such as persimmon and prickly pear cactus.  There are five main trees of Morocco including Thuya (pronounced “TWEE-uh”, a dwindling species which is used for beautiful furniture and tourist souvenirs), aromatic Cedar as is found in Lebanon and other parts of the Middle East, Cork Oak (the bark is used for fine wine, shoe soles, and accoustical tile) which is harvested every nine years, Date Palm of which there are dozens of species and every part of the plant is used, and the fifth called Argan which is endemic to Morocco. 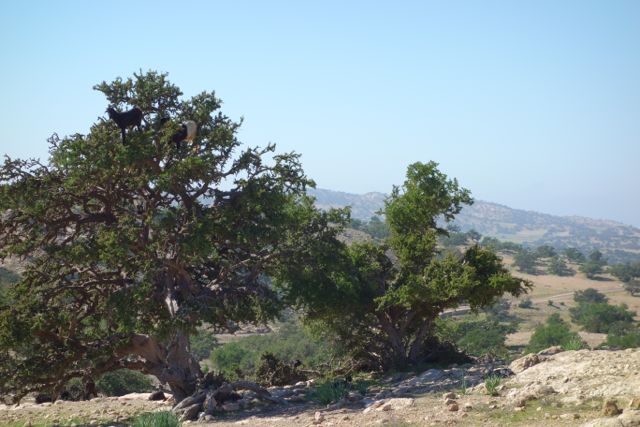 The argan tree (Argania spinosa, L.) first came to my attention as a component in an anti-frizz hair product popular in the States marketed under the name Moroccan Oil.  While traveling between the High Atlas mountains and the Atlantic coast we discovered one of the craziest things I’ve ever seen: domesticated goats climbing atop fuzzy-looking argan trees!  This of course, peaked my curiosity and I had to find out more.

The shepherds of this unique region of Morocco herd their flocks of ordinary domesticated goats into the argan forests whereby they climb (yes, CLIMB!) to the tops of the 12-20’ Argan trees and then eat the fruit.  They digest the fruits but let the inner kernels fall to the forest floor where they are then harvested by humans.  Some accounts say they digest the entire fruit and the kernel is harvested from their dung. 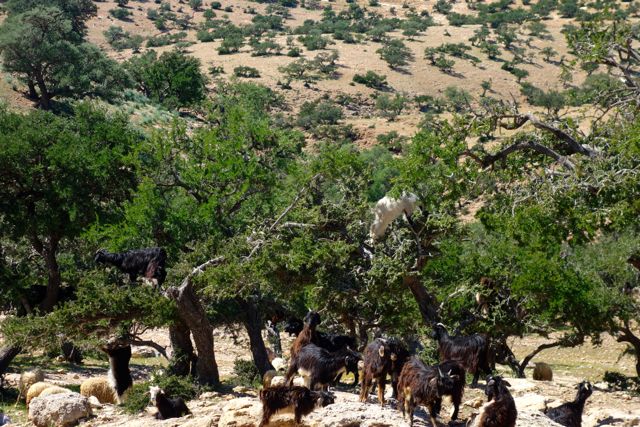 The nuts are then taken to a women’s collective where they are either cold-pressed for cosmetics or roasted and ground for edible oil.  The argan oil production has been limited as an industry primarily by and for women and there are collectives throughout Morocco.  The nuts are shipped to collectives outside the argan tree growing areas for collectives to work. 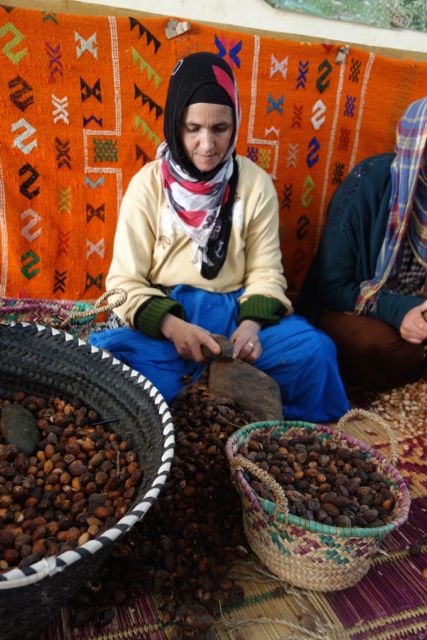 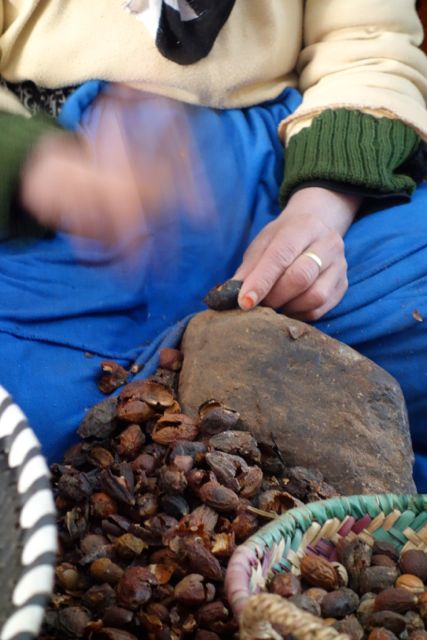 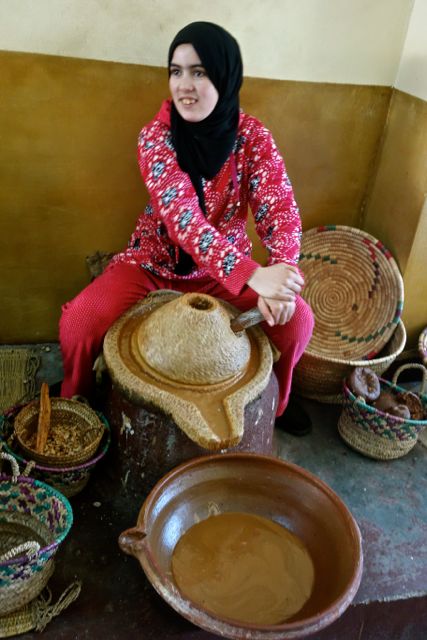 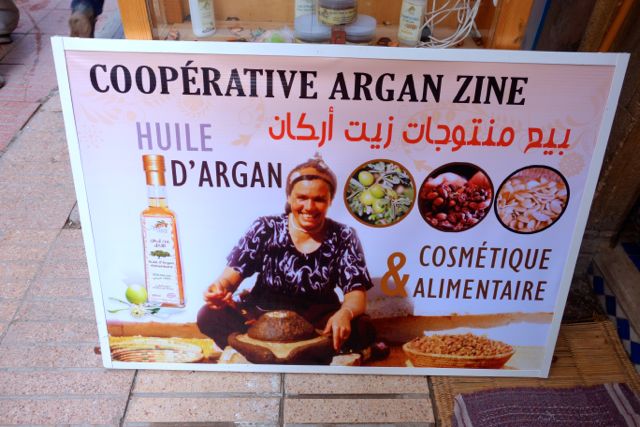 The benefits of both cosmetic and dietary oil are profound and just beginning to be understood.  According to a report by a joint effort between French and Moroccan pharmaceutical researchers, “Argan oil contains a high level of oleic and linoleic acids and is also particularly rich in phenols.  Since these metabolites are currently considered essential to explain some of the protective effects against cancer and coronary heart disease . . . and of y-tocopherol possessing high chemopreventative and anti-inflammatory properties.” (Charrouf & Guillame)

The Amazigh Diet, named after the traditional Amazigh argan grove dwellers and based on argan oil in the diet, is thought to be even healthier than the Mediterranean diet based on olive oil.  The cosmetic benefits are said to reduce wrinkles and have excellent hydrating properties.  We’ve been enjoying the edible argan oil drizzled over salads or we dip our bread into it.  It’s used as a finishing oil and tastes very nutty – yum!  I’ve also begun to slather my skin and hair with cosmetic grade argan and am loving the results.

Besides the goats, sheep, and ubiquitous donkeys throughout the country, we have been delighted to see lots of camels.  As we learned from Moroccan guide Lazrak, camels are extraordinary animals.  The camels in Morocco are dromedary with one hump rather than bactrian camels with two humps that are located in northern Asian countries.  According to Lazrak, they have two primary functions in Moroccan culture, the products harvested from them, and their more esoteric or intangible value. 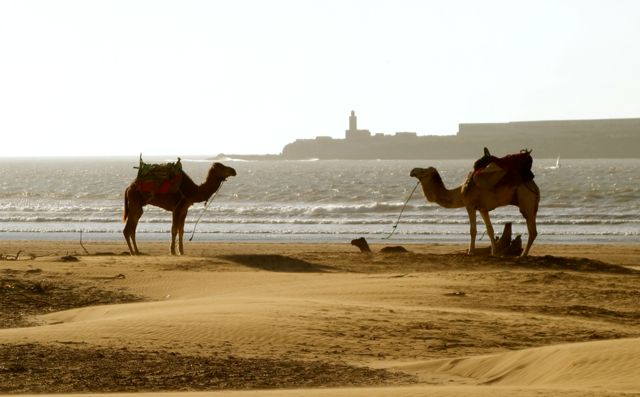 There are seven parts of the camel that are used by Moroccans: their hair, leather, meat, fat, bones, excrement, and milk.  The hair, or fur of the camel is woven into tents used by the Berber people and is also woven into rugs, carpets, and the garments worn by men and women, primarily the jellaba.  The leather is used to create bags used by many generations for the transport of water, gold, salt, figs, dates, and spices. It is also used to make jackets and shoes.

The meat is quite delicious as we found out when we tried medfouna, or camel pizza, and it is a bit saltier than other meats because the water in the Sahara is saltier.  The meat is very lean as most of the fat is concentrated in the hump of the camel.  It is also fairly cheap, approximately 70 dirham per kilo, or $3.50/pound.   There is approximately 300 pounds harvested from one animal! In traditional areas, the head of the villages buys one camel each week then the families buy what they need in portions as it is too hot to keep the meat for long.  Any excess meat is stored in salt. 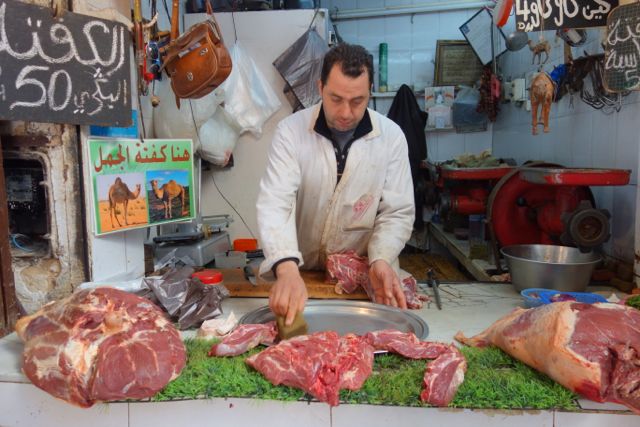 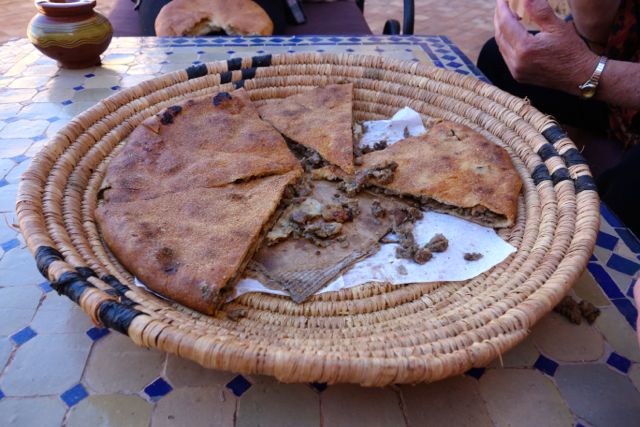 Approximately 50lb. of fat is stored in the hump and is used as a fire starter.  The smell of a fire started with camel fat is both an invitation to others (nomads, business people, guests) as hospitality is highly valued by all in Morocco, and it is a deterrent that repels rodents, snakes and any other pests.  The bones of the camel are primarily used in handicrafts such as knife handles and beads.  Old manuscripts have also been found to be carved on camel bones.  We have seen both bone color and brown dyed by henna.  Camel excrement is gathered for fuel and is added to straw and mud to build the adobe kasbahs that populate southern Morocco.  Finally, the milk of the camel is said to be closest to human breast milk.
What surprised me most about camels is their relationship with the humans that care for them.  They are docile, friendly, obedient, and loyal.  They defend their human by stepping on a scorpion or snake or shouting if their friend is in danger.  Sandstorms in the Sahara are the biggest danger to humans, and the camel will lie along the dune giving their human the best shelter.

They are called the “Ships of the Sahara” transporting up to 600 pounds of merchandise, and they are a secure companion to their intrepid traveller.

They will also pull a plow, alone or with a donkey. 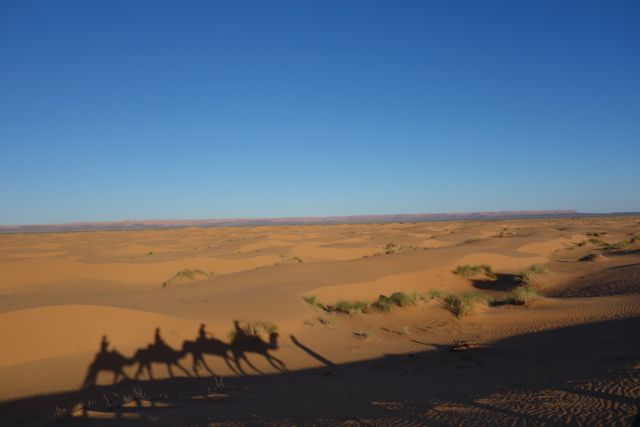 I had always heard that camels don’t have to eat for months and that they carry water in their humps making them the best animal for the desert.  This is partly true: according to Lazrak, camels can go 7 days without food and 6 weeks without water.  They are able to eat anything they find and chew their food for days.  They do not sweat, are able to smell water, and are not fooled by fata morgana (mirages) unlike humans.  Dromedaries have a water reservoir in their hump located between the fat cells.  They can survive on their fat which can also be converted into water (4lbs fat into 1L water). When they drink, they start very slowly then build in quantity drinking up to 130L water at one time.
As you can see, having a camel can be very valuable to a family in Morocco.  There are two kinds, the regular dromedary that we saw both loose on the hammada or dunes or used for the tourist trade, and there is also the more highly prized “mehari”.  Dromedary means “runner” in Greek and are used for racing; their long legs have evolved to keep them well above the scorching hot sand.  Regular dromedaries can move approximately 20 miles in one night (caravans travel the desert starting at sunset and finish at sunrise) while a “mehari” camel is thinner, taller and faster and can travel up to 100 miles in one night.

Regular camels fetch a minimum of $1,000 each while a mehari might start at $30,000!  There are about 500,000 camels in Morocco, but none are wild.  They live to be about 40 years old and a camel will stay with a dying man protecting him, and will stay until the camel dies of sadness. 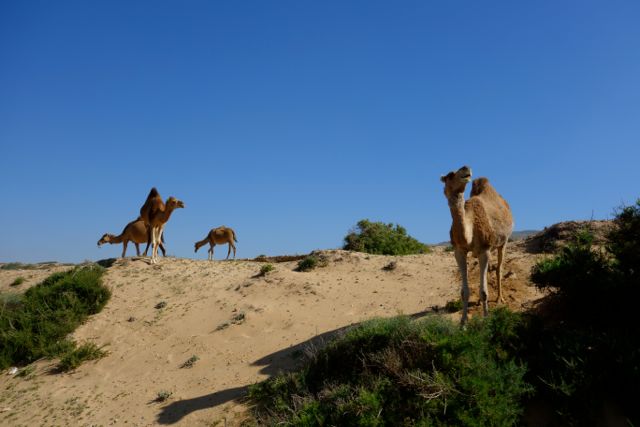 Our personal experiences with camels have been as tourists taking photos, riding them into the Sahara, and to enjoy a few of the products made from them.  I will always remember being pitched forward in the saddle as my trusty steed began to stand first with it’s hind legs then upon it’s front knees before being upright.  The smell of being behind camels in a caravan in the cool sunset air of the Sahara was pungent and unforgettable.  I will never forget the gentle touch and commands of our camel guide and the large be-lashed eyes of his dromedary friends that took us on our adventure.

Unbeknownst to me before this journey, camels are noble creatures, argan trees are indispensable, and both contribute to the uniqueness that is Morocco. 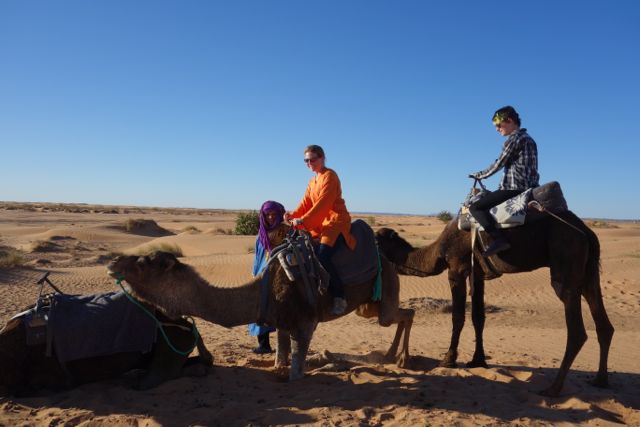