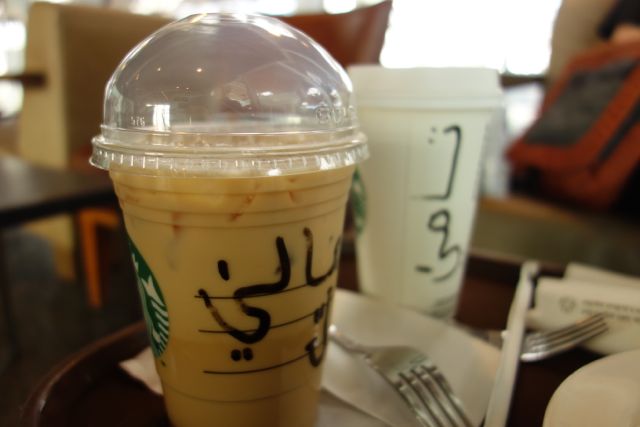 Each new country we explore affords us the opportunity to examine, “What is culture?”  What are the harbingers of differences between humans around the world?  Food differs despite the same ingredients, but that seems to be a result of cultural differences, not a core game-changer.  Many on both sides of the globe would argue that religious differences are the reason culture changes so dramatically, but everywhere I’ve been, Christian, Hindu, Buddhist, and Muslim-based cultures all have similar foundations based in love.  Rather, it seems to me that a primary player in cultural evolution is that of language. 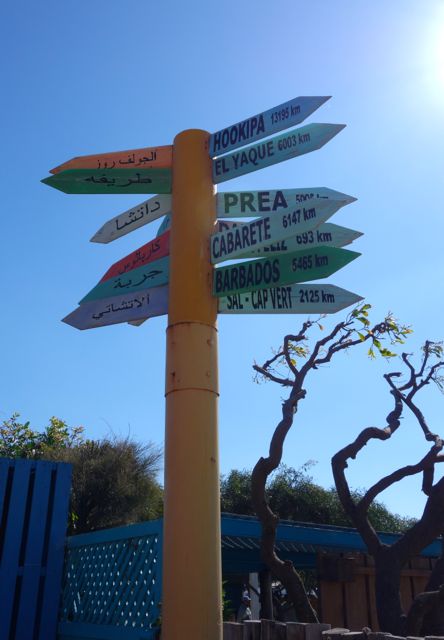 Morocco’s population is about 33 million and has four institutional languages: Moroccan Spoken Arabic (the native vernacular called ‘Darija’) is spoken by about 80-90% of the people, Standard Arabic is what is taught in schools for reading and writing, Tamazight is the most used Berber dialect spoken by 40-50% of the population, and between 33-39% of the people are also fluent in French.  Arabic and French are the languages used for business, diplomacy, and the government, while Berber is used mainly between family and friends. 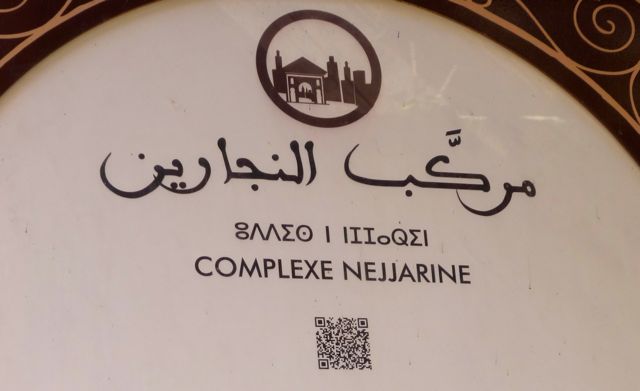 As Americans who have had a smattering of foreign language classes in Junior and Senior High School, we are at a distinct disadvantage in our monolingual status.  Moroccans on the other hand, tend to be bi-or tri-lingual or even like many of their European neighbors, poly-lingual.  Despite a 44% literacy rate (from the 2012 World Fact Book), Moroccans are immersed in Moroccan Arabic and begin formal Arabic and French instruction in primary school.  About half these students also come from Berber families where their first language is one of three Berber, or Amazigh dialects.  By High School, students may choose from German, Italian, or Japanese language classes.  A relatively new choice, English, is also learned by an increasing number of students and we learned that it is considered the language of prestige. 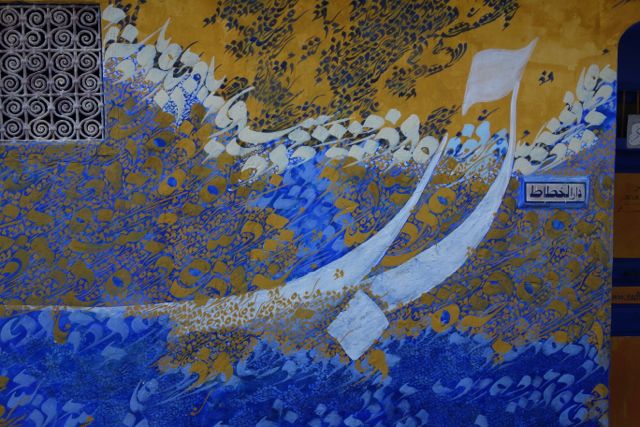 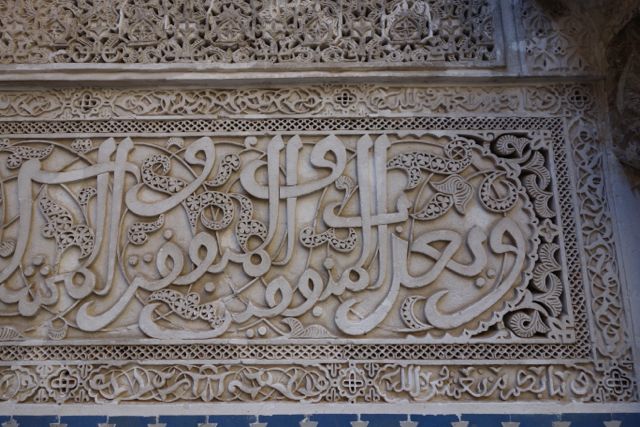 Unfortunately, our first words learned in Moroccan Arabic were “No, thank you,” based on the necessity of having to deny shopkeepers, touts, and children begging for bonbons (chocolate candies) access to our pocketbooks.  “LAH, SHOOkron” not only became our first phrase, but also one of the most used.  There are many Europeans traveling in Morocco, especially the French, and as this country was a French Protectorate between 1912 and 1956, we are primarily greeted by Moroccans young and old with “Bonjour.”  It is a source of delight for them when we usurp the usual greeting with a solid, “Salaam alikum” (SuhLOM ahleekoom) which means “Peace be with you” in Arabic. 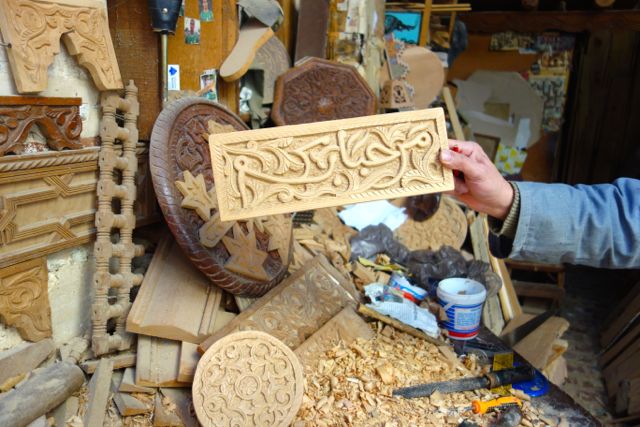 Moroccan culture is entirely unique despite its adoption of Arabic and French as primary spoken languages.  The laid-back acceptance of all its people, as proven through its history of religious tolerance, is evident in the modern population’s poly-lingualism.  Road signs are predominately written in universally understood symbols, while written signage is generally written in both Arabic and French (thank goodness as we would have likely ended up in Algeria if we couldn’t read the road signs!).    In 2011, the King of Morocco declared that all civil buildings would be named in Arabic, French, and the once marginalized and ancient Berber language of Tamazight.  To see the calligraphic Arabic read from right to left next to French in romanized letters read left to right, and the Berber symbols that remind me of pictograms are a constant reminder of the diversity that is Morocco.  The most prolific graffiti we’ve seen is the Berber symbol of the “Free Man” denoting a fierce independence in the nations historically oldest inhabitants. 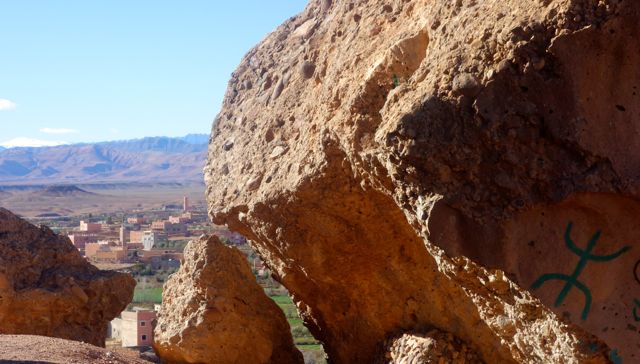 Our daily life in Morocco is both enriched and challenged by our language learning.  Living in campgrounds means that in any given moment we are flooded with a plethora of languages.

At this very moment, as I write by the fading sunlight, I hear Arabic techno music blaring from the restaurant next door, our Polish neighbors trying to explain their expatriate lifestyle in southern Portugal to our French neighbors (all in an effective patois of broken French and Spanish that the French couple can understand), two German fellows chatting from the rooftops of their neighboring motorhomes where they happen to be cleaning and futzing with their satellite dishes, a group of Swedes enjoying Happy Hour with a drinking song in Swedish, and two French women deep in conversation and sharing photos from their Ipads.

It seems entirely appropriate to me that we live in this microcosm of a polylingual culture of Morocco that surrounds us. 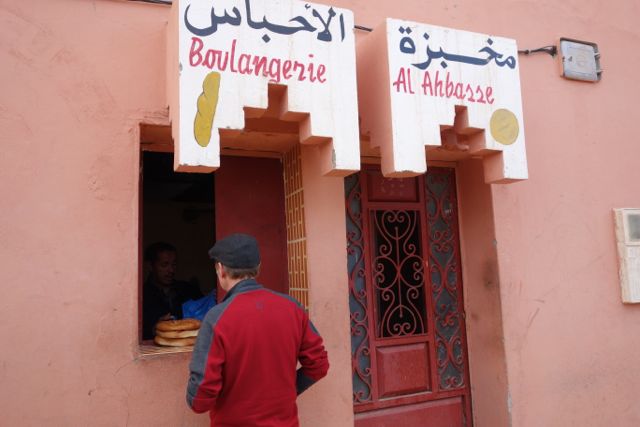 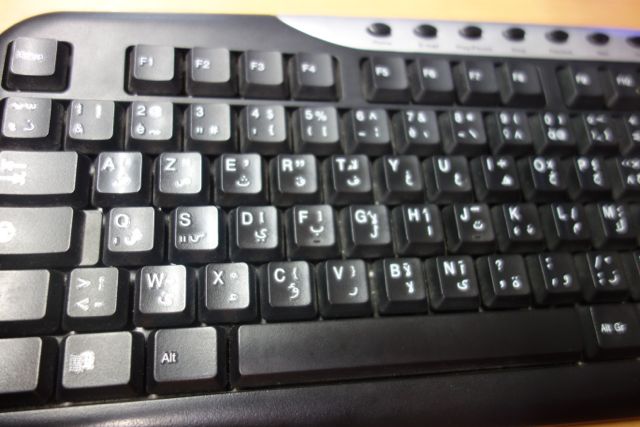 Shopping at the large supermarket is itself a language learning experience.  The first time we needed to restock our food supplies it took us several hours to figure out what we were reading on the labels, filter out the piped-in Arabic elevator music, and decipher how to ask for a certain amount of cheese to be cut.  In time, it became easier and far more enjoyable as we learned to try new foods and discover familiar brands packaged in Arabic writing.

Our most complicated and challenging moments with language have been when our motorhome Charlie required necessary attention.  Inquiring of the Berber mechanic what exactly is wrong, how long it will take to fix, and how much it will cost, using a combination of Berber to French to English translation and gesture got us back on the road but puzzled as to what exactly happened. 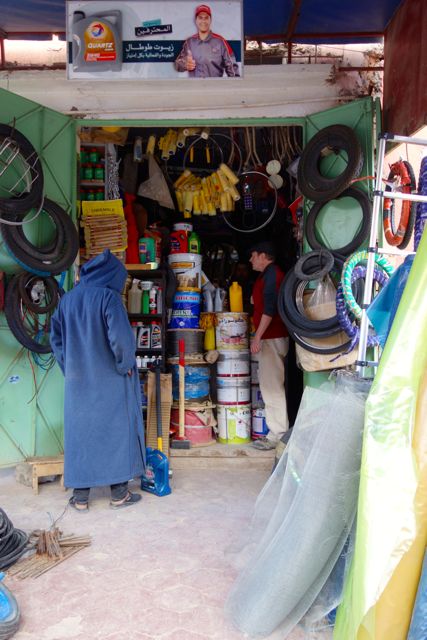 Today’s journey was a testament to the kind spirit of Moroccans; we blew a back tire while barreling down the highway, and despite our language differences (no common spoken language), we had no less than four parties stop to help.  One fellow heard the tire blow from half a mile away and walked to us, helping Aaron immensely with the change.  Another fellow pulled over and helped me wave the cars and trucks whizzing by to get past safely.  Two others pulled over and asked through gesture if we needed help.  When we arrived tired, stressed, and hungry in Tangier an hour later and found ourselves hopelessly lost, three other locals stopped and the last one was able to show us through gesture where to find our way. 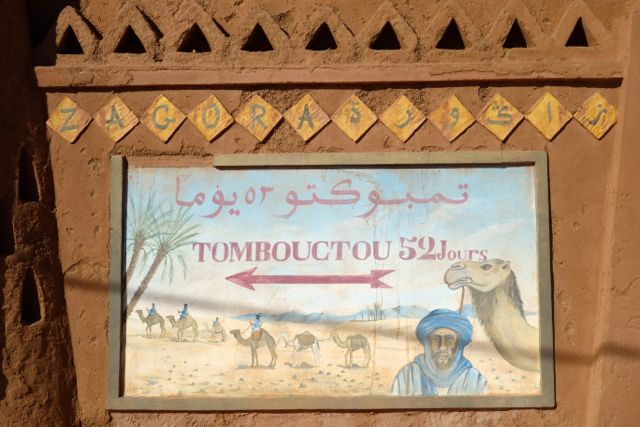 I believe Moroccans are not only facile with languages, but it is their openness to them and their efforts at genuinely connecting with others that have helped form their culture.  It is the smile, warm handshake, the blessing of “Saha” when we sneeze, and going out of their way to make us feel welcome that characterizes the language of this culture.  Rather than spoken, it is the language of the heart.