Shivers of emotion and the warm flush of meaning washed over me as I stood in the 1,000 year old synagogue in Toledo, the first capital of Christian Spain.  The white washed columns, carved pilaster arches and clam shell niche emanated a soft calmness that overtook the throngs of visitors swirling around me.  After visiting the city’s ornately decorated cathedral with it’s frenetic dark imagery of suffering, the simplicity of this space whispered of peace. 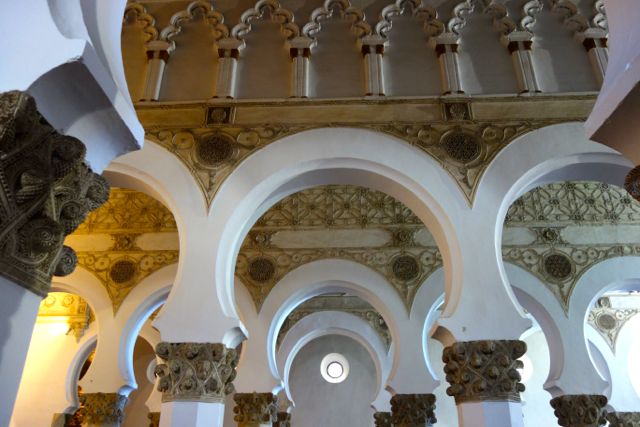 I’ve wondered for years, at the risk of naivete’ and ignorance, why Christians fear Muslims, the Jewish diaspora, the constant warring in the Middle East, and extremists of every persuasion have dashed the pacifist hope for peace.  I can see how a lack of understanding about non-dominant belief systems can bring about fear, and that the works of sensationalist “news” about heinous terrorists such as those of al-Quaeda and ISIS in the name of Islam could lead someone into false stereotypes and a fixed mind-set about others.

I think my faith in humankind and experiences that move me to travel in Muslim countries have mystified and worried some of my loved ones; however, I am validated through a new insight gained on this journey of a rather harmonious past between Islam, Christianity, and Judaism that gives me hope for future harmony.

Little did I know that this epiphany of hope would occur in the oldest synagogue still standing in Europe that was designed by a Muslim architect, sanctioned by the ruling Christian monarchy, and used by Jews.

Today, the Santa Maria la Blanca Antigua Sinagoga is a testament to “La Convivencia”, a period of time in Spanish history when Christians, Muslims and Jews lived harmoniously.  I had learned in both Granada and Cordoba that this period flourished there too, but here in Toledo was the finest example of peaceful cooperation between people of faiths that seemingly today can no longer tolerate each other’s existence. 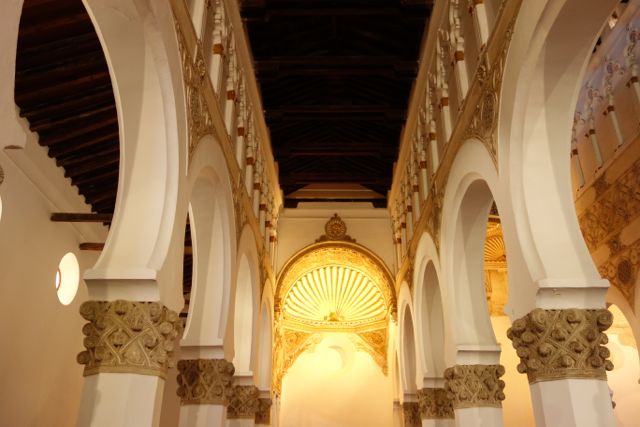 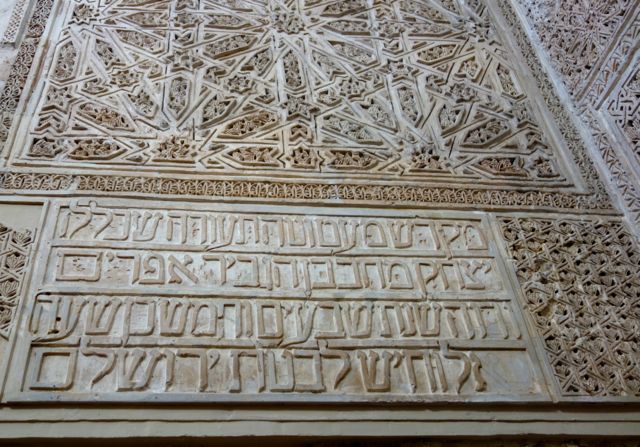 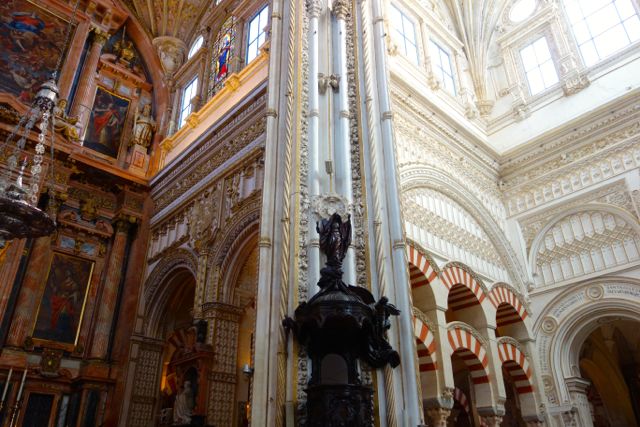 The Montessori teacher in me started to wonder, “Is there any chance for ‘La Convivencia’ to exist again here on earth, or are we doomed to hopelessness in light of today’s warring, terrorizing, disenfranchising factions?”  I never suspected that our sojourn into predominately Muslim Morocco would give me hope that there is actually a place on earth that harmony between believers of these three major religions could co-exist.

On a humanistic scale of cultures, Moroccans are tremendously friendly; strangers greet each other with “Salaam alikum”(suhLOM ahleekoom) which means “Peace be with you”, while friends clasp their hands palm to palm, then shake, then place their hand on their heart meaning, “friendship, solidarity, from the heart”.  Good friends also clasp their hands, pull together, and kiss first the right cheek then the left, sometimes twice on the left!  Peace is “Salaam” in Arabic and “Shalom” in Hebrew, and the history of the Jews in Morocco is a testament to this core solidarity of peace.  “Inshallah” is spoken with a hand gesture on the heart meaning, “God willing,” and is genuinely offered after wishes of safe travel or good health.

After traveling throughout Morocco for several months, my family ventured on a two-week guided tour of the Imperial Cities beginning in Casablanca, the economical capital of Morocco.  Not knowing much about the city, I had wondered if we were going to be checking out Rick’s Cafe from the movie ‘Casablanca’ fame or focus on the art deco architecture I knew littered this largest of Moroccan cities.  What I didn’t expect was for our guide Lazrak to not only show us evidence of “La Convivencia” from Moroccan history, but to exemplify what it is to live with religious acceptance in a modern sense.

Our first stop of the day was to a Jewish synagogue!  The stained glass windows reminiscent of Marc Chagall’s fantastical paintings left prisms of color throughout the opulent square room.  Arches and ornately carved ceilings bore floral and geometric designs: hallmarks of Islamic design.  Lazrak allowed us to soak up the atmosphere before talking about the importance of this synagogue to the large Jewish population of Casablanca, both past and present. 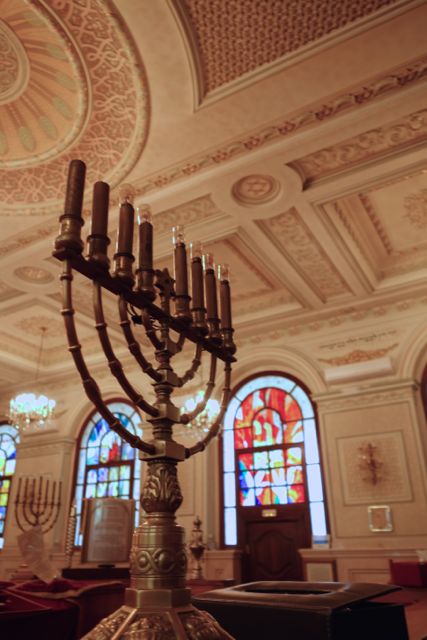 Our next stop of the day was to one of the largest religious buildings in the world.  The Hassan II mosque juts out into the Atlantic and it’s minaret can be seen from around the city.  We timed our visit to sandwich between the calls to prayer and joined the hundreds of visitors of every religious persuasion from around the world in touring the incredible site.  Our common awe in the mirror-shine marble floors, retracting wooden ceiling that rivals the roof in my hometown sport stadium, and the geometrically decorated brass doors that could welcome the Statute of Liberty was brought to a personal level by our shoes swinging from plastic bags around our wrists and our self-imposed quietness generated in a place made for peace. 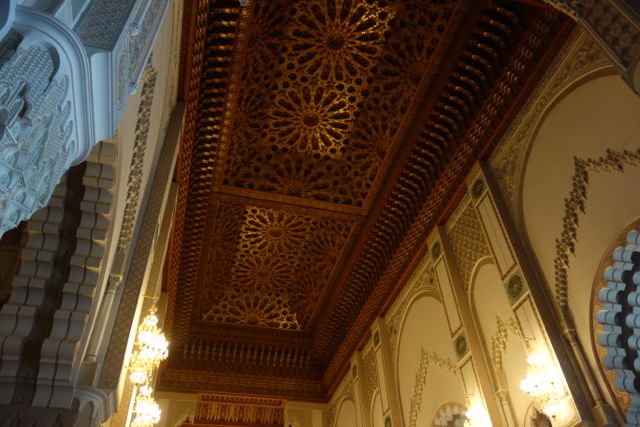 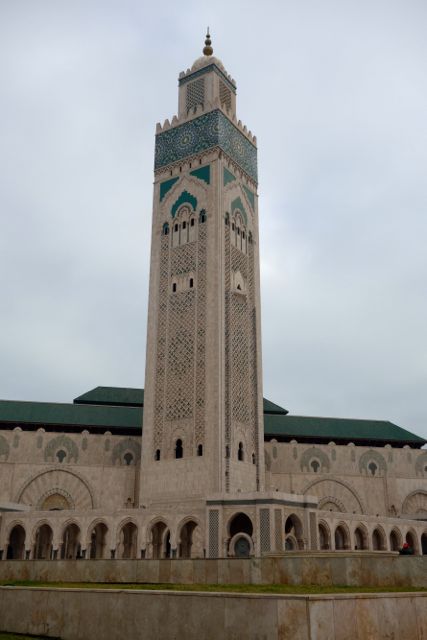 Our final stop in Casablanca was not to be Rick’s.  Instead, we took some time to understand the images created in stained glass that flanked both walls, floor to ceiling, door to alter, in a Christian church.  The scenes were clearly about the spread of Christianity: angels hovered over a distinctly Northern European village while four stereotypically-clad men from four continents gathered and a wind-driven ship bobbed on glass waves nearby. 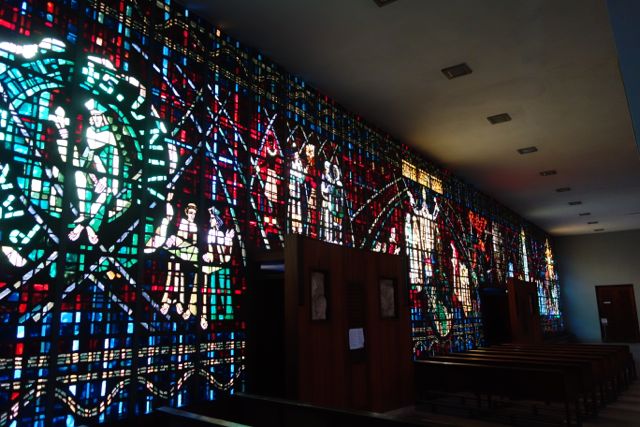 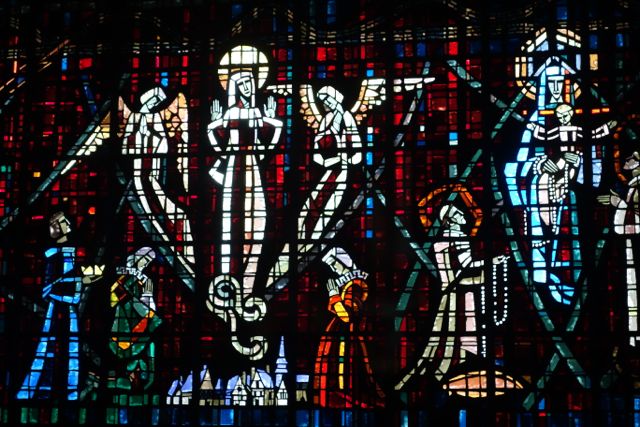 In his wisdom and experience as a guide, Lazrak allowed many of our initial questions about Islam, tolerance, and religious practice in his country to wait until we gained our own impressions and built trust in our relationships with each other.  Our visits over the next week to synagogues and Jewish cemeteries in Fez, Erfoud, and Marrakesh and the plethora of mosques and Koranic schools, or medrassas, only brought about more and more wonderment about how Jews and Muslims and the smattering of Christians that populate Morocco seemingly live in harmony.  Lazrak reminded us that true Muslims must accept all the prophets of god, that all three religions were monotheistic and that all the people of Morocco are Moroccan first.

His stories of courage from a past Moroccan king that refused the Nazis his country’s Jews, of how neighbors worship side by side, and how the mellahs (Jewish neighborhoods) and Jewish grave-sites in Morocco today are intact and respected gave us a lot to ponder. 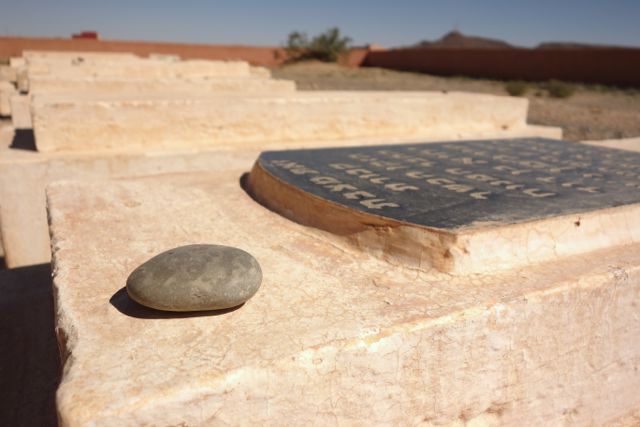 From the English Church in Tangier with the a stair-stepped crenelated minaret-shaped bell tower with geometric designs carved into the plaster, to the arched and tiled synagogues in Fez that exuded the feel of a mosque, I observed Islamic architecture and design in every place of worship we visited.  Could it be that a culture could bind all places of worship and provide a template for peace for people of different beliefs? 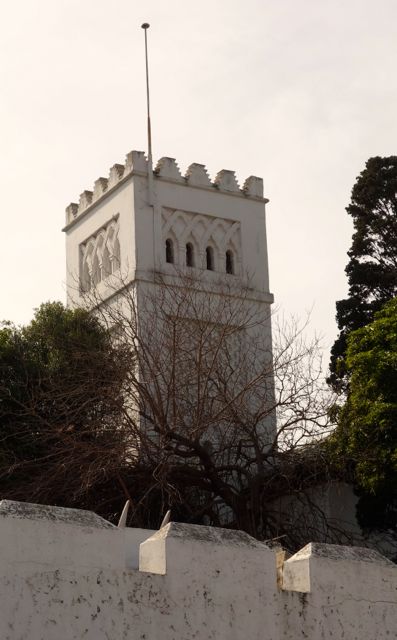 My adult life has been consumed with creating classroom cultures that cultivated problem solving and nourished peace in our young people; however I have felt my profession’s efforts thwarted by the dominant culture that perpetuates violence and degradation of those that are different.   Why is it that my own country’s Christian-centric perspective cannot seem to see humankind’s commonalities and incorporate acceptance as bound by culture? It seems that the efforts of the greater culture would be the antidote to intolerance. 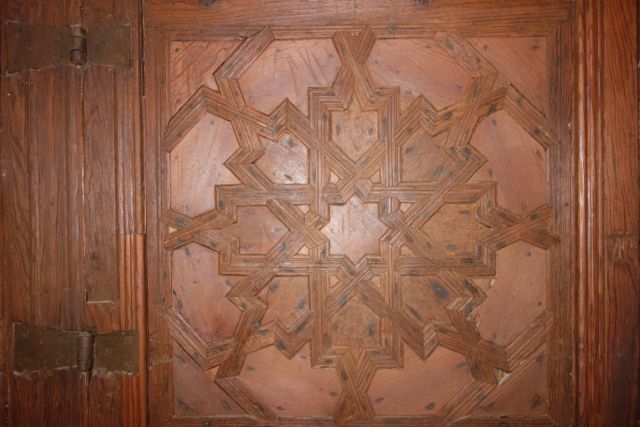 In Moroccan culture, I found evidence that there is hope for peace.  In a synagogue in Toledo, I found that harmony had existed in the past.  Rather than focusing on the religious strife and the examples of intolerance we hear about daily, maybe our schools and media could highlight those current moments and those hundreds of years in the past that might help us achieve “La Convivencia” today.  I do hope for peace to again reign, God willing.