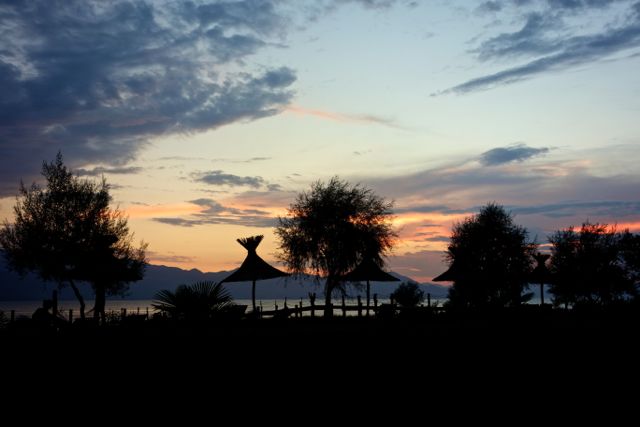 Albania is a small country that shares its Adriatic coastline with the more traveled countries of Greece and Montenegro.  Although it is beginning to emerge as a more popular destination for a few Europeans, you may have not ever heard about Albania.  If you have, you might know it as one of the last Eastern Bloc countries to renounce communism.  You may wonder . . . why should you travel to Albania?

Here are 10 reasons why this lovely country should be on your bucket list:

1.    Albania has magnificent mountains!
From the southern mountains that hug the coast to the interior ranges, Albania sports craggy, steep, magnificent mountains.  The “Accursed Mountains” bordering Montenegro and Kosovo are a hiker’s delight.  Four-wheel drive vehicles are necessary to access the villages of Thethi and Valbonne guaranteeing you an authentic mountain village experience.  The switch-back highway that climbs north towards Vlorë on the southern coast is an impressive feat of human ingenuity. 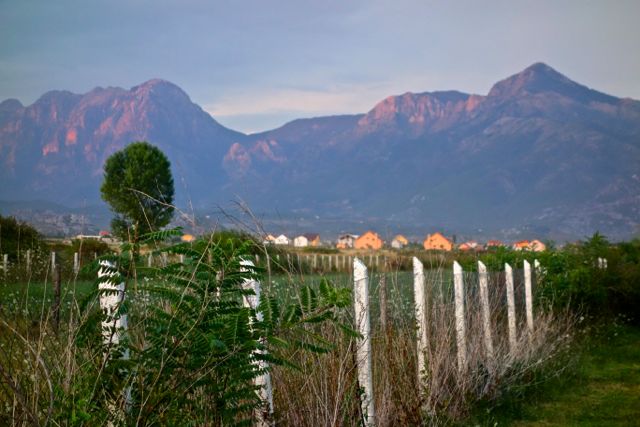 Mountain view from Lake Shkoder
2.    Two words: Albanian Riviera.
Even the name conjures visions of turquoise blue water and white beaches.  In this case, the southern beaches are white pebbles, the water warm and amazingly clear, and the straw umbrellas beckoning.  Backed by hills ringing with goat bells and dotted with medieval castle ruins, the beaches are geared to suit a variety of situations – you can rent apartments in Sarandë, hotel rooms in Himara, or pitch your tent or camper in quaint Ksamili. 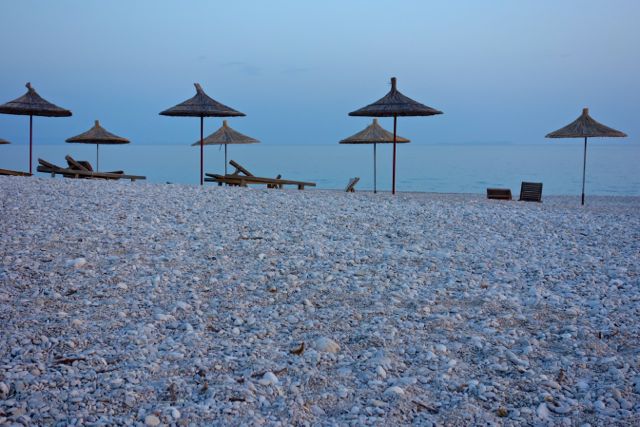 Beach just north of Himare on the Albanian Riveria
3.    Albania has Castles!
Look upwards into the hills and you might catch a glimpse of organized rubble that still exudes a bit of magic.  Look a little closer and you might find a castle ruined five hundred, a thousand, or even fifteen hundred years ago!  The castle of Old Himare sits perched on a steep embankment overlooking the rocky white beach far below.  Occupied since the 8th century BCE, its polygonal walls have stood witness to the Byzantine and Ottoman empires and fell into disuse as late as the 18th century.  Check out the Ottoman town of Berat that hosts a living village inside the ancient walls of its mountaintop castle ruins.  Meanwhile, the flat mesa-like perch of Rozafa Fortress reveals stunning views of vast Lake Shkoder, the old town of Shkodra, and surrounding mountain ranges. 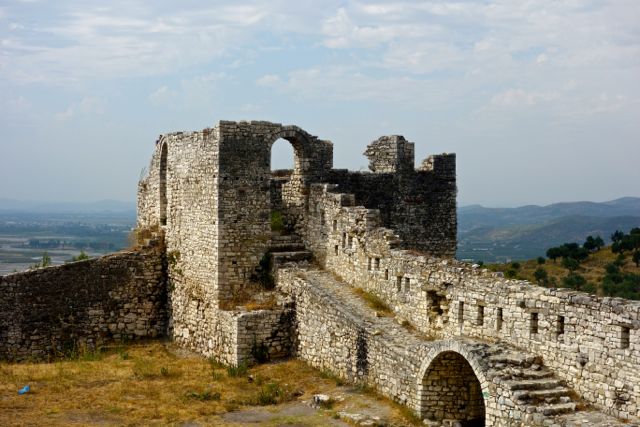 Castle ruins above Ottoman Berat
4.    Old Albanian towns emit exponential charm.
Emerging from the former Eastern Bloc, you would think Albania would sport primarily communist-era concrete block architecture.  While there are traces of the reign of depressing distressed concrete behemoths, there are a surprising number of charming villages such as Berat located in the middle of the country.  Its many-windowed Ottoman-era homes are stacked like legos reaching to the mountaintop castle.  The polished limestone streets are worth walking, especially when you join the rest of the village for their early evening stroll. 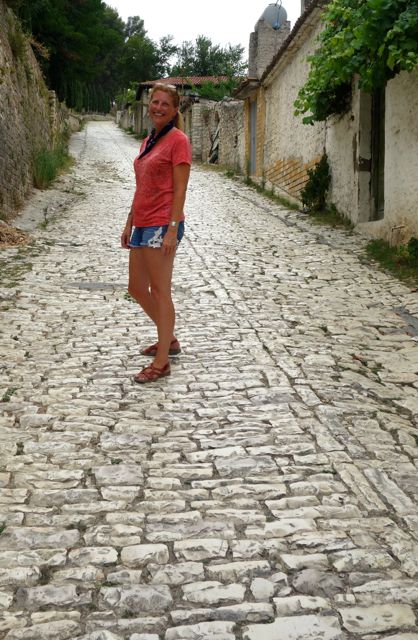 Climbing up through lovely Ottoman Berat
5.    Inexpensive yet tasty food and drink.
Where ever possible, be it on the terraced hillsides or lush northern plains, Albanians work their land and harvest the fruits of their labors as evidenced in the many fruit and vegetable stands that line city streets and country lanes.  Fresh melons, figs, plums, nectarines, grapes, tomatoes and cucumbers all ripened on the vine or tree make for tasty roadside snacks.  Neighboring cuisines and similar climates have seemingly influenced the flavors of Albania.  Try grilled fish, octopus ceviche, a farmer’s tomato and cucumber salad, or a thick yoghurt sauce all reminiscent of Greek cuisine, or the little pork sausages, grilled peppers, or minced meat patties laced with paprika you might also find in neighboring Macedonia or Bulgaria.  Bürek, that ubiquitous of fried cheese pastries, found throughout the Balkans and Turkey can also be found in fast food shops specializing in this tasty staple.  Albanians have been making beer and wine longer than most countries have existed.  Try the Tiranë or Korçe brew, and just about any white or red wine will satisfy your palate.

6.    Recreation opportunities proliferate in Albania!
Not one for sitting on the beach or strolling about like a townie?  Albanians offer a wide variety of recreational opportunities for tourists.  Hire an open kayak for two in Himara, jet ski in Ksamili, or rent a stand-up paddle board on Lake Shkoder.  Four wheeling?  Paragliding? Rock climbing?  All can be found in Albania, a country rife with natural wonders. 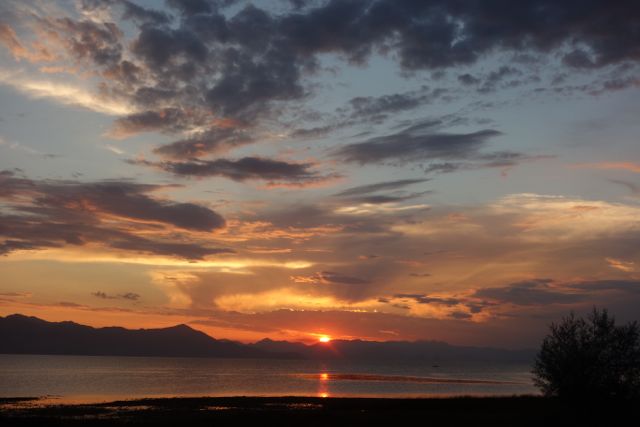 Looking over Lake Shkoder to the mountains of Montenegro
7.    Affordable vacation in an unconventional country.
Albania is an emerging economy and as such continues to be affordable for tourists.  Local transportation, excellent food, and lodging are some of the least expensive in all of Europe.  Recreation costs such as equipment for hire are low enough for you to try a new sport without breaking the bank.  Entrance fees for attractions such as castles or the Roman ruins at Butrint range from US$3-$10 making this country one of the most accessible for vacation fun.

Affordable beach-side accommodations on Lake Shkoder
8.    The spirit of Albanians.
The Albanian economy continues to flounder for many reasons, not due to a lack of effort by its citizens.  Albanians are hard-working and you will see people working in the fields, in shops, and unfortunately, outside of their own country in order to support their families.  You will hear Albanians lament the loss of their young workers to other nations, and yet you still hear the pride and hope they have in their country.  Despite the economic hardship, you will be amazed by the generosity that permeates the Albanian culture.  Don’t be surprised if you are given gifts of wine, wild herbs such as lavender harvested by hand, or unsolicited discounts on your accommodation as they are a hallmark of Albanian generosity.

9.    Customer service is ingrained in Albanian culture.
For a country not used to tourists and with little infrastructure for the high-end traveler, Albanians imbue the spirit of hospitality.  Their warmth and kindness toward each other and their customers is evident.  You will discover an Albanian shows genuine interest in you, remembers your name, and goes out of their way to insure you’re receiving everything you want out of your holiday.  You will find the high level of customer service belies their novice status as an unfolding tourist industry.

10.    Off the beaten track and unspoiled by mass tourism.
Emerging at the tail end of a focus in the Balkans by tourism boards, Albania is poised to host travelers from afar.  While some might focus in on a lack of luxury as off-putting, it is the discerning traveler that chooses meaningful interactions with local people and discovering the stunning countryside that will appreciate this hidden gem.  While Albania currently sees visitors primarily from Central Europe such as Germany, Poland, Czech Republic, Slovakia, and Hungary, its natural beauty and hospitality of its people make this country climb bucket list rankings throughout the world. 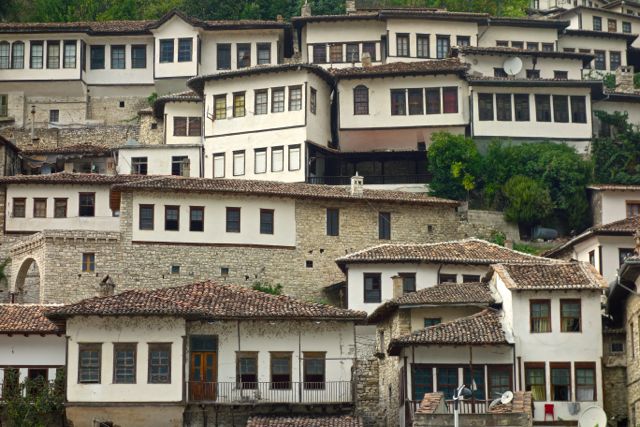 Go find out yourself why Albania beckons.

For more information about traveling to Albania, check out the tourism board at www.albania.al