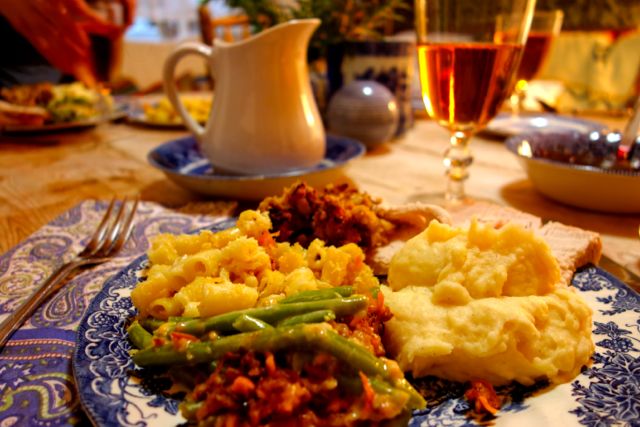 The point in our previous extended journey through the South Pacific and Asia when we decided it was time to go home was not when we contracted the parasite Giardia in Indonesia, nor when we had to wade down a river that was once a road in Thailand, or even the holy war that broke out around us in India.  It was the realization that we couldn’t generate that great feeling we get when we carry on the traditions we’ve always had around Christmas in the United States whilst traveling with a backpack through India.  Aaron and I have never felt so homesick.

The mega advertisements that start around Halloween, that frantic need to cover everyone on the list, and the let down when taking down the tree are a nuisance, but one we endure because it’s all part of the traditions our families instilled in us.  Thinking about that perfect sweet gift for a loved one, reminiscing over the providence of each ornament hung, and enjoying the neighborhood light show with a mug of peppermint hot chocolate make the annoyances trivial in comparison. 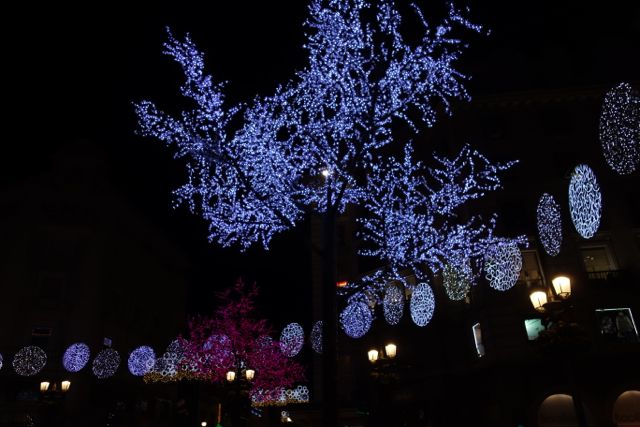 Last year after celebrating a non-traditional Thanksgiving (with an unforgettable foie gras in orange creme sauce) in Avignon, France, we began to play Christmas carols Aaron had thoughtfully loaded onto his iPod before leaving the States in October.  Our daughter Mali insisted that we decorate a Christmas tree for our motorhome and to personalize paper bags as our “stockings” for a mini gift exchange.  While my sensible “let’s save the money for more travel” side balked initially, she was right. 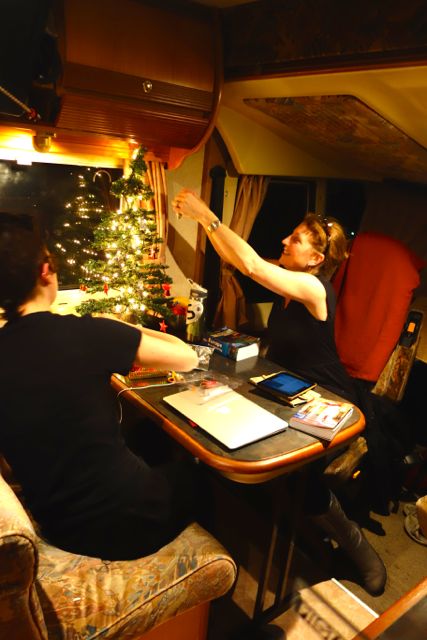 Our table-top tree was bought in a Chinese dollar store in San Sebastian, Spain and was soon decorated with tacky but cute wee ornaments while stickum snowflakes adorned Charlie’s windows.  We enjoyed the ubiquitous Christmas markets and fancily lit towns from Trier, Germany to southern Spain helping rouse our excitement for the impending holiday. We stole a few hours in Granada away from each other to do a bit of shopping and once Christmas rolled around and we had rolled on to Ronda, Spain, the spirit of Christmas was subdued, but there.  We had conquered our past failure with Christmas abroad!

This year, we hadn’t made any plans for Thanksgiving but the serendipitous workings of the universe aligned in the form of meeting new friends on the ferry from France to Ireland.  Allison and Chase and their beautiful Husky Koda are from North Carolina and making their way around the world as well.  They were on their way to a rental home near Galway while we were on our way to explore the Emerald Isle.   We met through Koda (the dog is seriously a love bug) and after chatting while our super ferry rocked it’s way over the Irish Sea for the next 22 hours, plans for an American-style Thanksgiving in Ireland were under way.

The parallels in our new friendship emerged over the week of Thanksgiving.  Chase and I are the cartography-loving travel planners and kitchen cheerleaders while Allison and Aaron are the primary menu-planning recipe-sharing head chefs for the week.  Allison and I share backgrounds and an affinity for the arts and Aaron and Chase work the books and business ends of our respective location independent companies.  Our 20 year age difference melted away as we discovered common ground in Irish pub life, books, life philosophies, and documentaries while respecting our differences such as their penchant for college football and ours for science fiction movies.

Our commonalities were further solidified when we discovered we really wanted to explore more of each other’s part of the United States.  Here we all were, half-way around the globe and away from our family and friends, sharing what was important to us: our common American Thanksgiving tradition of connecting with others.

Like most families today, Thanksgiving traditions we observe transcend the myth of the pilgrims breaking bread with welcoming Native Americans.  Our traditions are about honoring our gratitude for our many blessings  and sharing our thanks by appreciating a meal together with recipes that are imbued with memories.

One of our first questions while bobbing along the North Atlantic was, “Do the Irish eat turkey?”  Allison, being the uber organizer that she is, ordered a turkey from the local butcher in their village of Kinvara as soon as they arrived.  Much to our surprise, it was fresh – no need for ordering an organic turkey in Ireland, they are all organic!  Thank goodness for Allison’s forethought as turkey is considered a traditional Christmas meal in Ireland: getting one a full month ahead was unusual! 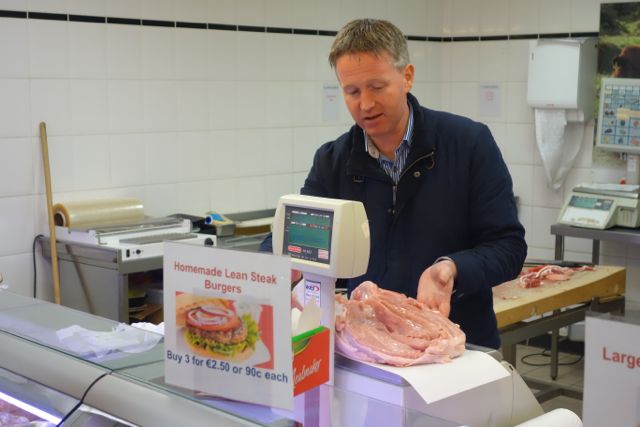 Our discussions of what Thanksgiving in Ireland would look like were permeated with recollections of Thanksgivings past.  In addition to the the turkey, our respective families share similar menus including mashed potatoes and gravy, stuffing, cranberry sauce, and green bean casserole.  Chase and Allison’s love of pecan pie is only matched by ours of pumpkin!

The shopping trip to a big American-style grocery store assisted us in locating hard to find items such as crispy onions for the casserole, but as Ireland is not corn-dependent like America, there was no cornmeal for Allison’s moms’ cornmeal stuffing.  Alas, no pumpkin for pies nor soft rolls, but Aaron’s homemade macaroni and cheese, while unconventional, helped round out our craving for homey carbs. 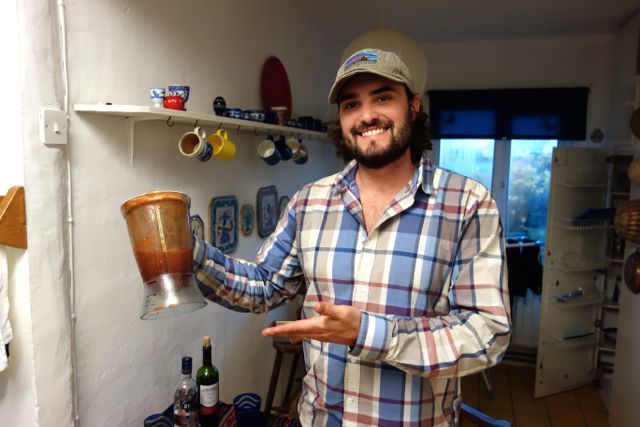 The morning of Thanksgiving fulfilled our need for cozy conventions: our hostess was up early to ready the drinks table and prepare the bird while the rest of us hung out in front of the fireplace reading and listening to Christmas carols loop on the iPod.  Aaron and Allison happily cooked for several hours while Chase, Koda and I tended the fire and shared our mutually inspiring travel stories.  The hundred-year-old cottage offered fun accouterments for a specially-set table including antique Willow-ware plates, mish-mash cutlery, and a blue bottle collection that hosted fresh rosemary from the kitchen garden. 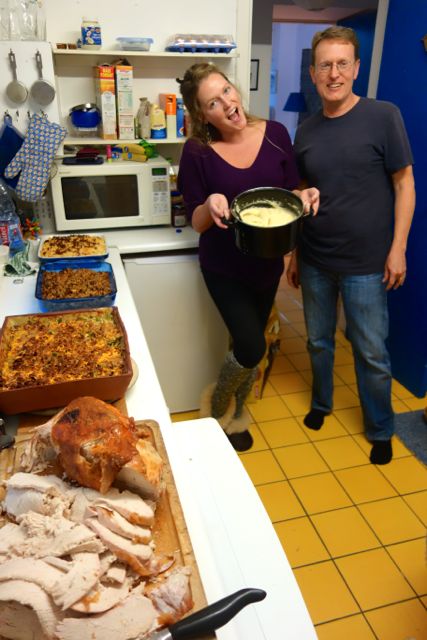 Allison and Aaron, our Thanksgiving chefs ready for plating . . . delicious!

The meal was sublime.  Even Koda agreed as it took about 1 minute for him to devour his own plate of yumminess.  Our gratitude towards each other was clear: sharing this day with new friends that value similar traditions made the day all the more memorable.  Chase was able to bring up college bowl games later in the day, and our hours on Skype with family prompted a warm contentedness rather than acute homesickness. 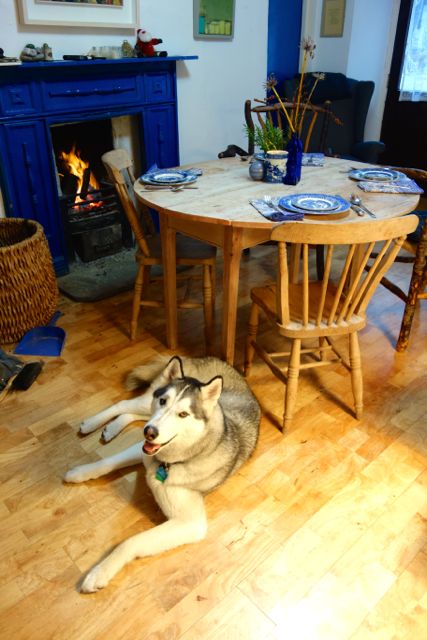 Koda ready for his Thanksgiving meal

Traveling for extended periods of time can be hard without established routines, especially those during observed holidays.  We will always remember our experience with Allison, Chase, and Koda and our shared American Thanksgiving in Ireland as being a highlight not only of our journey, but the essence of why we celebrate Thanksgiving at all.

We found that the elements that make a holiday celebration successful when you’re not in familiar environs are embedded in the efforts you make without trying to duplicate what you’ve had at home.  Food, music, talking to our families, creating a bit of cheerful decor, giving and connecting with others have all contributed to our recent successes. We have another Christmas abroad to celebrate in a couple of weeks and we’re going to haul out our table-top tree, break out the carols, and create new memories of the holiday.