There are so many aspects of culture that we take for granted.  Who stops to wonder why our cities use billboards to advertise? or why our cars are named as they are? or why we expect schools to be free but not health care?  One aspect of culture I have been wondering about and have often taken for granted is that of architecture.

American cities tend to have multi-generations of architectural styles: one part of town may have been built when the city founders had a vision of creating permanency, so the buildings are made of brick and designed to withstand the ravages of time;  meanwhile, another section of the same city might have boxy high-rises built in the 70’s next door to newly designed industrial-chic complexes.  Our residences also tend to convey this diversity of time and the ever-changing pursuit of what is “modern”.

Our travels throughout Europe have rekindled my interest in art history and have inevitably honed my senses towards architecture.  My first major impression is one that is likely taught in every Architecture 101 course in University (a course which I have not had): form follows function within the limit of resources.  For instance, our travels through Iceland revealed low-lying structures made with thick walls and smallish windows.  There are few trees in Iceland, so the buildings were initially made of stone or sod or both.  Modern Icelandic homes have steep roofs and rarely rise above two floors.  Most are free-standing and while the roofs are primarily green or red, the exteriors are painted white, blue, or green.
Cities in the Netherlands, on the other hand, revealed narrow homes built using the walls of their neighbors and often rising three stories.  The land in the Netherlands is primarily polder, or reclaimed land created by dykes, which necessitated densely-built buildings with shared walls.  The homes are so narrow that each has a hoist beam jutting from the top floor to enable furniture or other large goods to be moved into the top floors since staircases are typically narrow and spiral.

These homes are personalized by unique roof facades in stair step, bell-shaped, or single-gabled and bright colors of blue, green red, or yellow.

You can distinguish former warehouses by the shutters they sport.  Many of these structures were built in the 1300 to 1500’s and with the settling of the land, some now tilt or bulge out like overstuffed cartons.  I noticed this architectural style throughout the Netherlands and Flanders (Northwestern Belgium) although the structures in Belgium tended to have primarily stair-stepped facades and brightly colored exteriors. 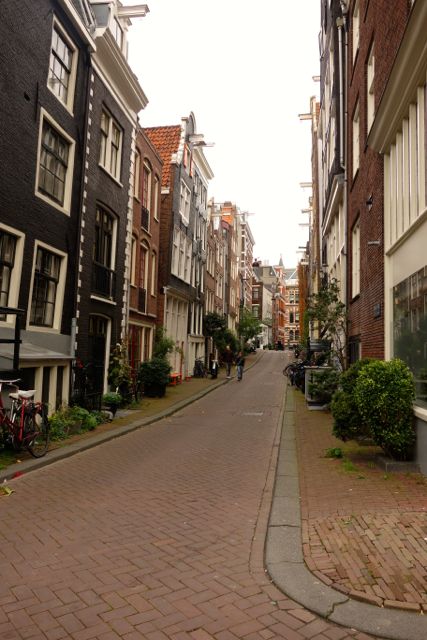 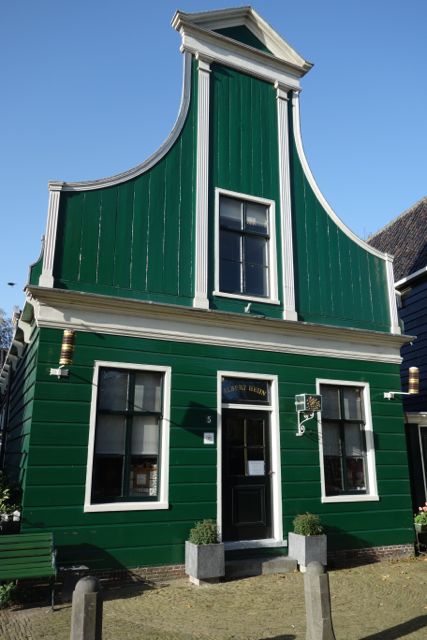 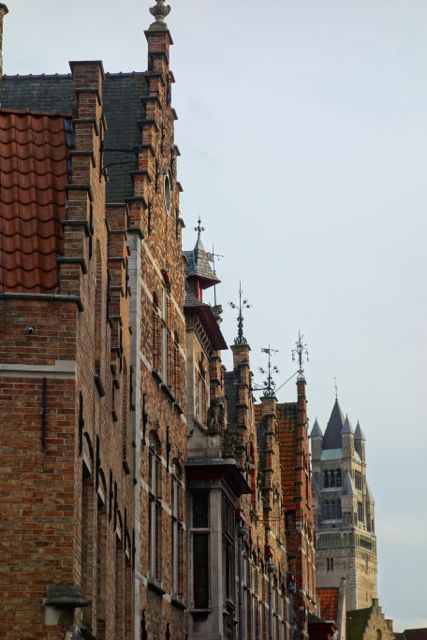 As we entered Wallonia, in Eastern Belgium, I began to notice a distinct change in the topography of the land which in turn translated to new building materials and styles.  The rolling hills and valleys cut by natural rivers revealed stone cliffs and the emergence of stone buildings independent of their neighbors.  As we navigated the narrow country roads, we’d pass through small villages dominated by a squat stone church.  Many of the homes had a stone barn and other outbuildings that created individual courtyards within the town.

These towns hid in the hilly crevasses and I could just imagine the villagers in the Middle Ages relying on the safety of these refuges. 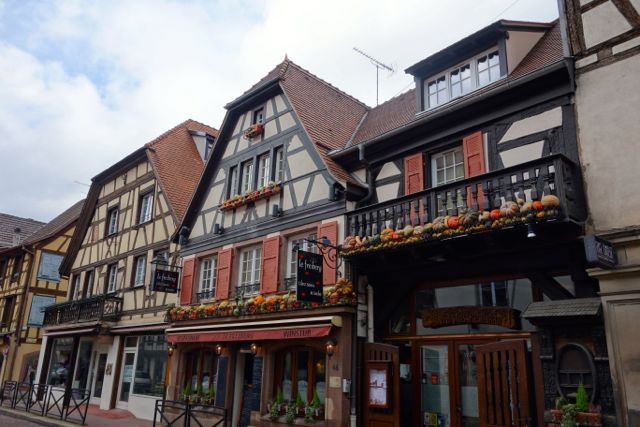 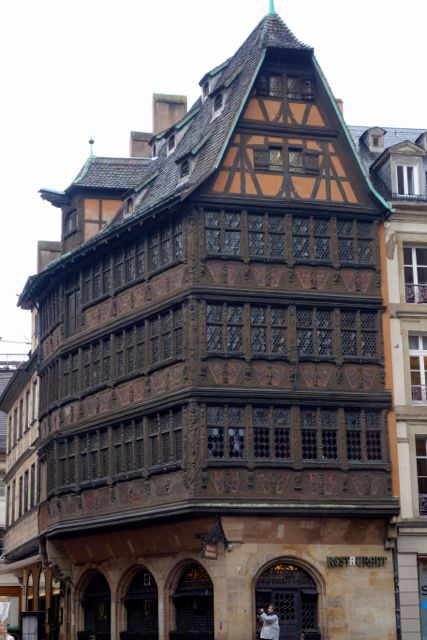 The further east we drove, the more mountainous and forested it became.  Luxembourg is a magical place with castles perched on a hill at each turn in the road, and the towns below filled with sparsely decorated box-like two-story homes.  As we neared the German boarder, quaint two- and three-story half-timbered structures started to emerge.  The ancient German city of Trier and French Alsatian city of Strasbourg brought the half-timbered style to a high art form.  Window-boxes hosted bright flowers or seasonal botanicals such as pumpkins and gourds.  The plastered walls varied from creamy whites to orange to bright turquoise blue, and the half-timbers ranged from geometrical precision to fanciful carved wood embedded in layers like a wedding cake. 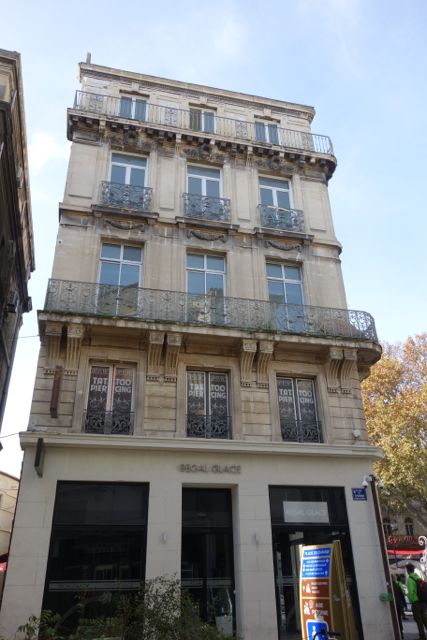 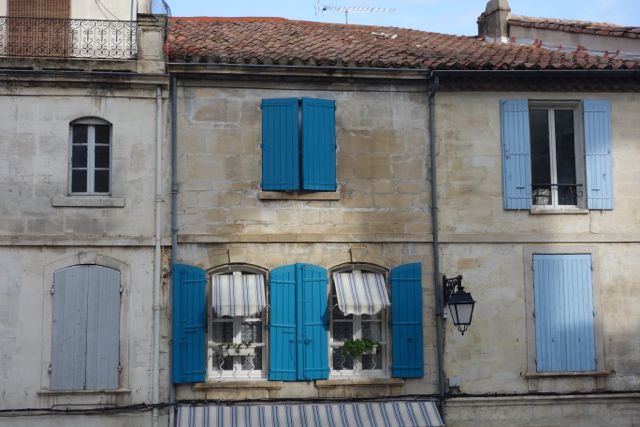 As we travelled south in France towards Lyon, the buildings became taller and the color palette softened in hue.  Wooden window shutters continued to be the norm, but each window now sported an iron lattice given the impression of a wee balcony.  The distance between Avignon and Arles, both located in Provence in the south of France, is a mere 15 minutes, and yet as the landscape changes from the hilly Massif Central to the drier Mediterranean scrub, the architecture follows suit.  Avignon is the former residency of the Papacy (for about 70 years in the 1300’s) and the city reflects this grandeur and sophistication, while Arles, known as a haunt of van Gogh and Gauguin, is far more rustic with peeling walls the color of creamsicles with blue-tinged shutters.

Clearly form and function are at play, but I have also examined why these places hold greater beauty in my eyes than the towns and cities of my own America.  I contend that their uniformity, whether it be self-imposed, by government-decree or the constraints of nature, creates a harmony for the senses.