As intrepid travelers, our Moroccan journey has had a loose itinerary.   The fact that my mother-in-law Susan would be joining us part way through our three month sojourn and we’d be seeing the primary points of interest in the interior with her, we decided to start by making a wide circumnavigation around Morocco in less-traveled areas.

After arriving in the modern port of Tanger Med, just an hour and a half and a world away from Spain, we promptly started to head east along the Rif Mountains towards our first destination of Tetouan, a city near the Mediterranean with a great old medina.  The windy roads through the mountains were dotted with donkey carts laden with bottles of water or olive oil or possibly diesel fuel, men waiting for taxis along deserted stretches, and beautiful vistas of green, steep mountain peaks.

While road conditions were blacktopped with minor repairs, there were signs we were able to decipher as they were written in French and Arabic cautioning drivers of falling rocks from the steep cliff sides.  Thankfully, the closer we got to Tetouan, the wider and smoother the roads became. 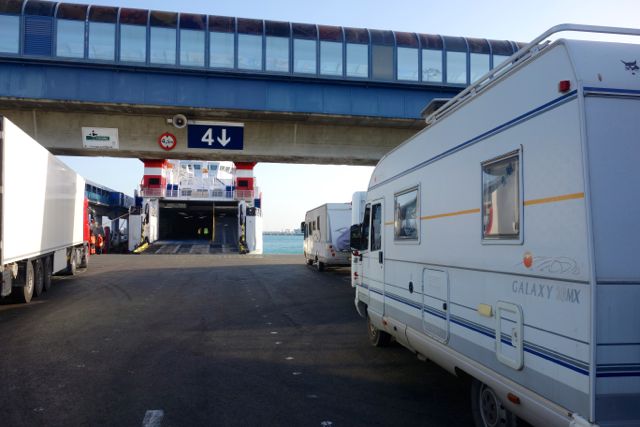 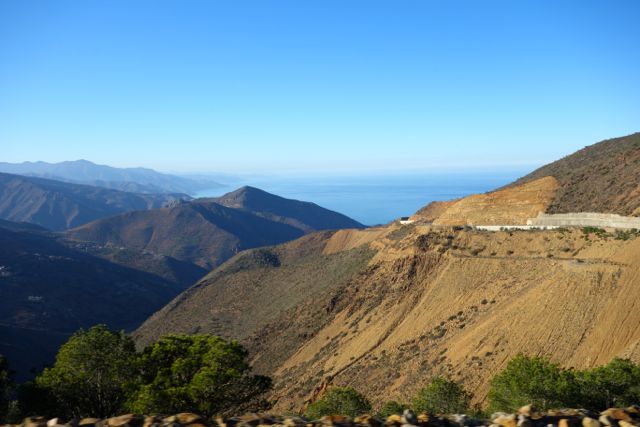 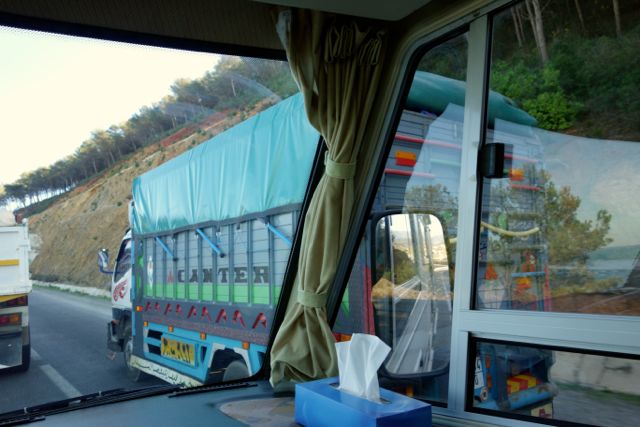 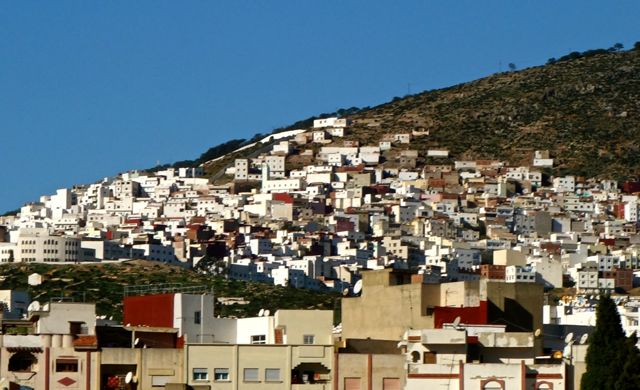 Our next destination was even further east, a modern Moroccan town along a beautiful Mediterranean coastline called Al Hoceima.

On our way, we had our first taste of driving on rough roads in Charlie but had no idea of what was yet to come.

We enjoyed a quiet New Year’s Eve at a campsite given freely to us by Omar, a friendly proprietor that only wanted us to advertise his location to others.

Al Hoceima is a good 130 kilometers from the closed Algerian border and the only road leaving the town going south seemed to be horribly neglected.  Huge potholes, pavement that fell away from the shoulders in jagged edges, and windy mountain passes that varied in grade and signage denoting hairpin curves meant that our average speed was about 50kph or 30mph.

Worse than the white-knuckle moments where either a crazy blue Mercedes grand taxi passed us on the curves or an over-loaded hay truck would come barreling towards us only to get into their lane at the last moment, was the shaking and jiggling we put poor Charlie through.  Sometime that day, a terrible scraping and annoying squeak coming from above the passenger side seat started and increased throughout the day.

Despite these challenges, our vistas were amazing; we traveled from the mountainous coastline, through arid valleys and over high passes, only to drop into the hammada, a dry rocky pre-Saharan landscape that borders the Atlas range that is the spine of Morocco.

Our relief at now traveling on the mostly flat terrain was short-lived: the road conditions would be alright with roughened tarmac at the beginning of each Province we went through, only to deteriorate the further we went along the Province.  The squeaking squealing above my head was making both Aaron, Mali and I cranky.  Hours later, after traveling through arid landscapes that could have been in southern Utah or northern Arizona, we arrived in the small town of Midelt. 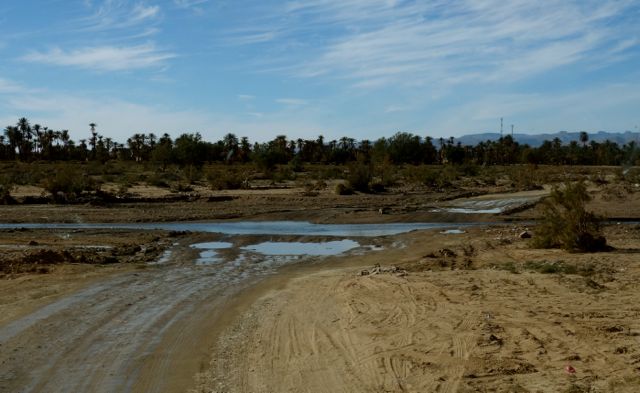 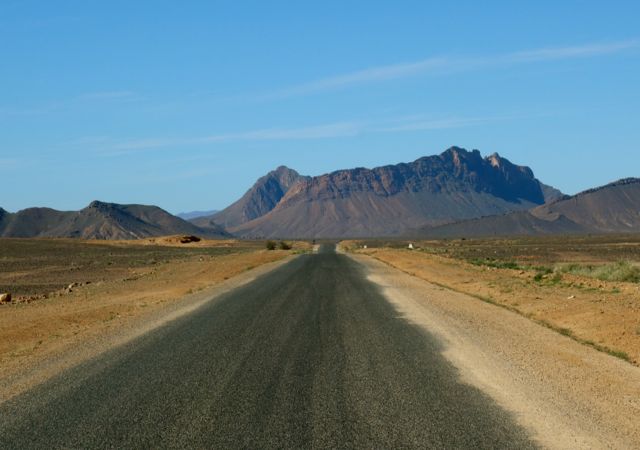 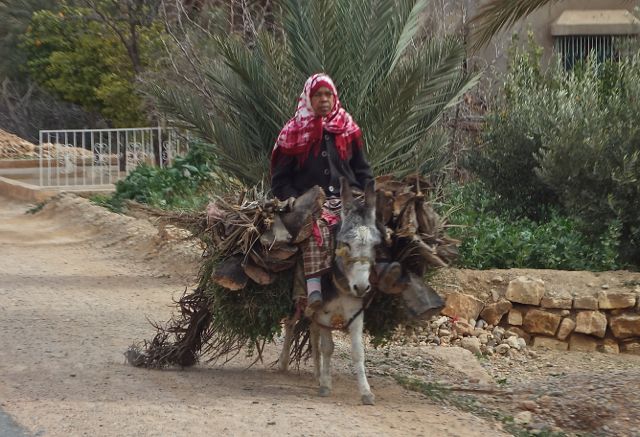 As we entered the Municipal Campsite in Midelt, the proprietor waved his hands at us and said that he could hear a terrible “clump, clump, clump” sound in our driver-side wheel and that he smelled something hot.  He was going to call his mechanic and have him come the next morning.  We were dazed, edgy, and if you know Aaron at all, a bit skeptical as to whether this guy was legit.

We later found out that as we limped into town, the guy at the hotel down the street noticed the smell and sound and called to our proprietor saying, “Crazy Holland! Crazy Holland!” as our rig is registered in the Netherlands and everyone assumes we are Dutch.
That night was our coldest yet in Morocco.  While the sun beamed all day, we had climbed up to Midelt, at 1508m about 4500’, which sits between the High and Middle Atlas Mountains.  We woke to a light frost on the ground and a very dirty mechanic in red Marlboro coveralls inspecting our wheel.

We agreed ahead of time that he could look at the problem and after taking the wheel off, he discovered a broken part on the clutch and horribly scored and worn brake pads.  While we bought a common and widely known-to-be sound chassis, a Fiat Ducato, the parts we needed were about 200k north over treacherous roads crossing the High Atlas in the larger town Meknes.

Our new Berber brother, our proprietor Hadif, worked out that he would drive to Meknes that night, stay in a hotel, get the parts we needed the next morning, and drive back.  One of our biggest frustrations was the language barrier.  Our mechanic spoke Berber language first and some Moroccan Arabic while we had to rely on Hadif who speaks Berber, Arabic, French, and only a smattering of English, but is basically illiterate and doesn’t read or write.

Aaron speaks some French, but he doesn’t have any French vocabulary for car parts or mechanical issues!  We gave Hadif our trust and a bundle of emergency euros to get the job done.  In the meantime, we were still living in Charlie, however gingerly as he was now propped up carefully on several jacks. 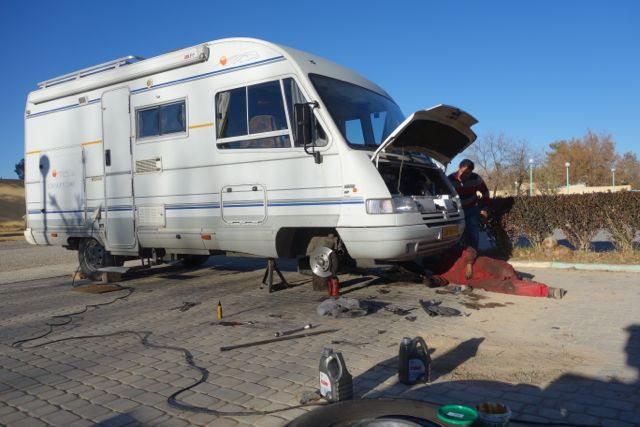 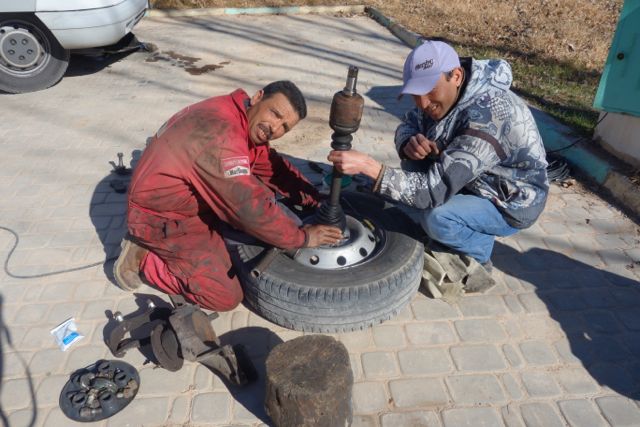 The next afternoon were were very relieved to see Hadif return, unfortunately with a bit of a fender bender on his car as he spun out on the icy roads and hit another car.  Our mechanic, along with the inevitable three friends/looky-loos handing him what he needed of his makeshift tools, spent the next five hours replacing the clutch, front brakes and pads, and cleaned the back brakes.

In the meantime, Hadif invited us to his home where his mother, from the Touareg tribe of the northern Sahara, made us a special couscous meal along with “Berber whiskey” which is actually very sugary mint tea.  We were very touched by their hospitality and warmth inviting us into their home.  After returning to Charlie and a late-afternoon test drive with Aaron, we had the stamp of approval along with a small cheering crowd!  Yeah “Crazy Holland”! 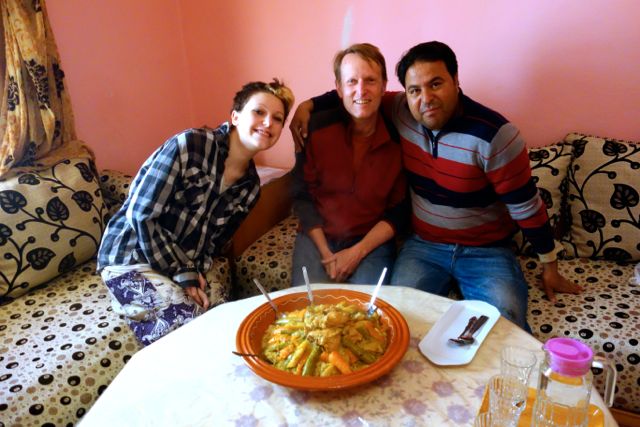 Several days later, Aaron located the source of the annoying squeak.  The mechanism holding the bunk bed above the cab was long overdue for a good grease job.  Alas, the screech was stifled!

Our drive southwards towards Erfoud, a town on the northern edge of the Saharan desert, continued to be fraught with potholes, disappearing shoulders, and the occasional rocky detour or river forge, but the friendships we made across languages and cultural barriers made our most stressful moments traveling not only bearable, but turned into a positive memory.

-written and photos by Tammy 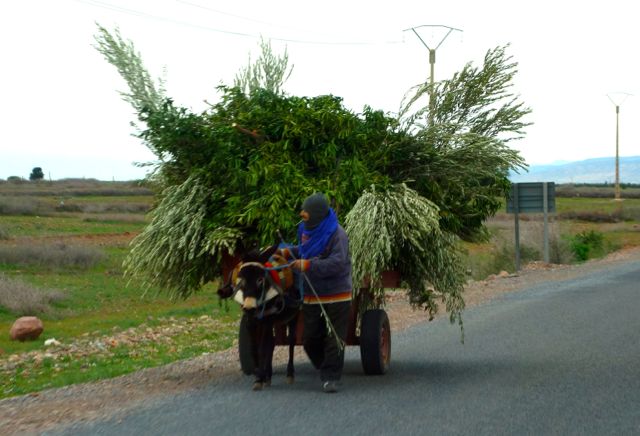