Gift of the Gab: Finding Stereotypes in Ireland

Irish lore and iconic customs permeate American history and are evident in our popular culture.  Lucky Charms wouldn’t be lucky or charming without it’s leprechaun.  Wearing green on March 17th saves you from getting a pinch.  I’ve even used the cliche phrase “He’s got the gift of the gab . . .” in describing someone who is able to talk with ease without easing up.

We travel with our upbringing flowing in our veins, including cultural biases and expectations of people.

Aaron and I constantly challenge our own assumptions and question previously held ideas about just about everything.  You’d be surprised then, as I was, to find out that many of the stereotypes about Ireland that have pervaded the American consciousness rose to the top of our experiences in Ireland.   Except for the leprechauns (darn it).

The first Irish person we met was taking our tickets at the gateway to the Irish Ferries in Cherbourg, France.  While we were blown away at how friendly she was, it was her “gift of the gab” that set the proverbial stage for the rest of our journey.  Our interactions in shops, pubs, campgrounds, historical attractions, and even along the sidewalk were memorable and immensely slowed down by our encounters.  Rather than annoyance, we felt gratified by the slower pace produced by the chance meetings.

Gift of the Gab

Total strangers would stop us (even gesturing to us from the sidewalk while we were in Charlie) and chat.  It was amazing to me how much one person could talk without interruption or an answer to their questions!  I’m sure not everyone in Ireland was born with this gift, but the Irish culture seems to nurture the trait that enhances a natural curiosity and friendliness towards others. 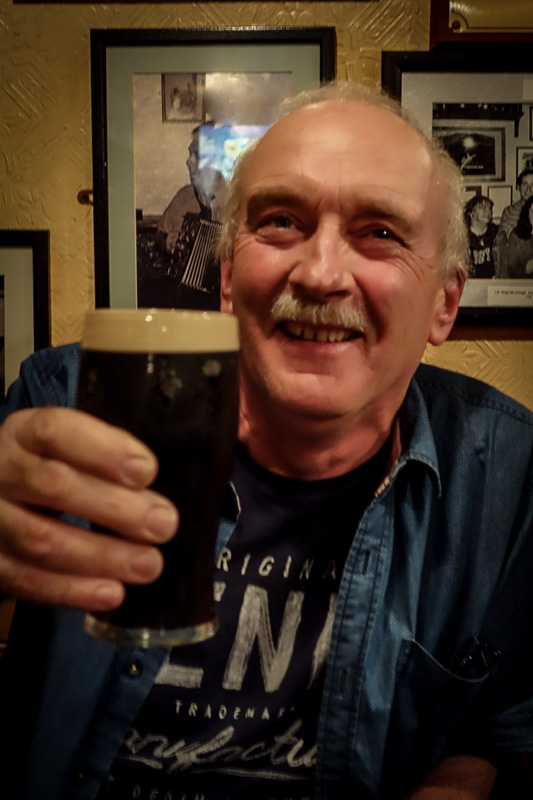 Friendly local stopping me to photograph him in a Galway pub

Why do we wear green on St. Patrick’s Day?  I don’t know the actual reason, but as historical St. Patrick preached in the Emerald Isle, I can see why green represents Ireland.  Coming from the Pacific Northwest, you would think I know green.  But Ireland seems to redefine what you know about green by the incredible variations on the hue throughout the country.  In creating a coloring book of Ireland, Crayola would have to invent new crayons with colors called winter lichen, twilight moss, stony algae, swaying grass, rolling fields, and countless other tones and shades that meet somewhere between yellow and blue that are Ireland. 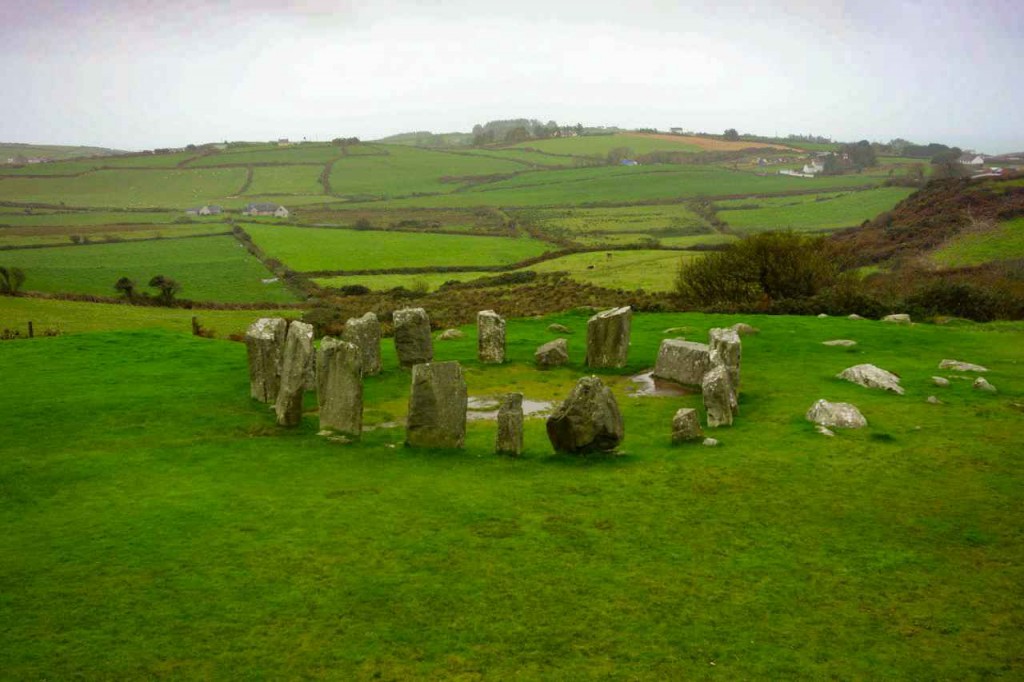 When I researched Ireland before arriving on its shores in our motorhome Charlie, I read that the countryside was connected by excellent motorways that all lead to Dublin on the island’s East coast.  This meant that circumnavigating the country would be by the smaller roads that intersect those motorways.  Fellow travelers confirmed that the emphasis was on smaller, and our journey confirmed just how small they could get.

Some of the more touristed routes such as the Ring of Kerry and the Dingle Peninsula have a specific direction tourists are encouraged to drive: if you happen to be behind a tour bus, you are stuck for the duration of the tour and share each attraction with a busload.  If you go in the opposite direction, you must give way to the wide tour busses and in places, back up until you can give way.  We felt fortunate that our timing of winter camping in Ireland meant that there are few tourists and no busses to encounter, hence we were the largest vehicle on those roads and others gave way to us.  Phew! 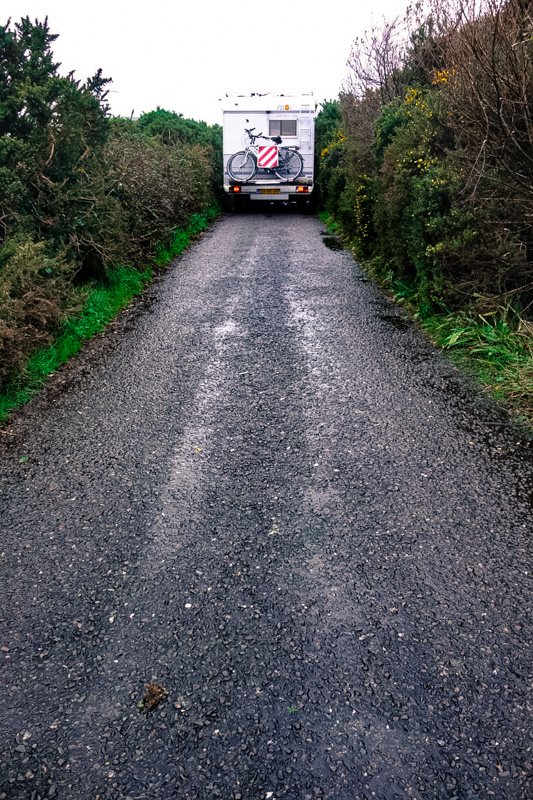 Charlie on the Ring of Kerry scraping both sides of the two-way road!

Years ago I become entranced by the newish (1950’s) addition to the Irish instrument scene, the bodhran (say BOWron).  I became obsessed playing along with jigs and reels and experienced my proud moment when I played along with a Scottish bagpiper in a Seattle neighborhood parade of two.  As you can imagine, I really wanted to see the bodhran in action in Ireland.

Irish music is as entrenched in Irish culture as Brazilian music is in Brazil.  Local pubs host music nights either regularly, or at any time with anyone that shows up with an instrument.  In the handful of pubs we frequented, we experienced as few as two and as many as nine musicians at once and at some point each night, someone broke out singing a ballad sans instrumentation.  Musicians trickle in carrying pipes, guitars, banjoes, fiddles, harps, bodhrans, accordions, and if we’re lucky, an Irish bagpipe and fill the corner reserved for whoever turns up that night. 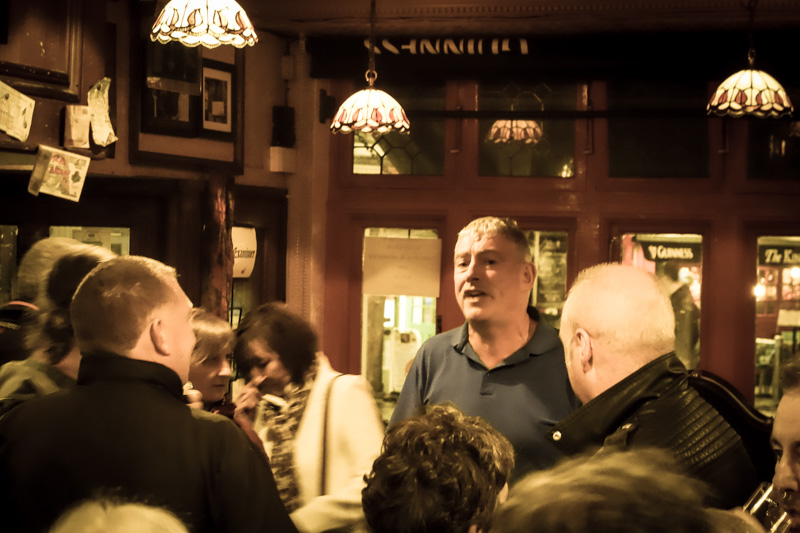 Local breaking out into song – a bawdy ballad gets the crowd going!

One stormy night while we were in the colorful wee town of Dingle (where a dolphin locals have named Fungie hangs out the town harbor), the accordion and guitar player were obscured by the phalanx of locals that erupted in dance.  Vestiges of the stereotypical cloggers and straight-armed dancers from Riverdance fame were evident in the folk versions of spinning and stomping fun.  When the gazers (us) were pulled in to join, we were quick to admire the strength and endurance you must have to twirl and weave to the fast Irish beat.  It’s an evening I’ll never forget. 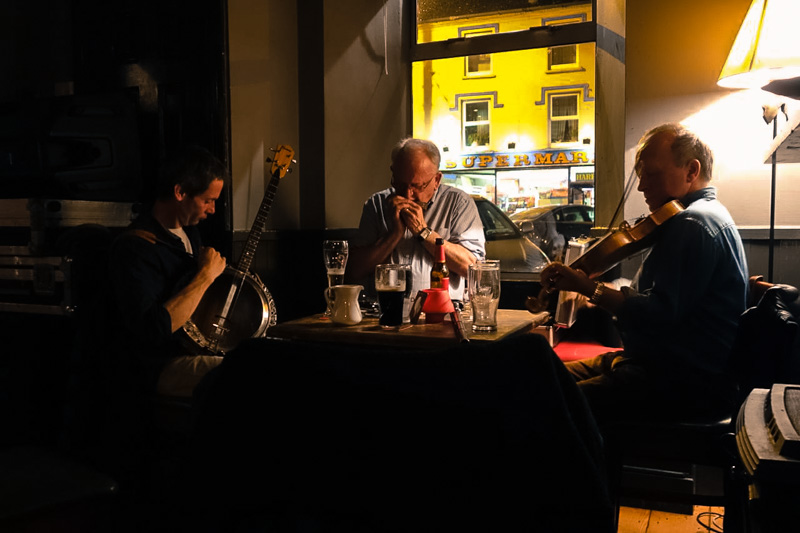 Irish music is as universal as the fuel that energizes it: Guinness beer.  After traveling to 40+ countries, we’ve seen first-hand Irish pubs in 40+ countries.   Although I’ve had Guinness in a few of those, I’d always been told by those in the know that Guinness simply tastes best in Ireland.  I’m pretty sure I didn’t believe it then, but now I do.  It’s creamier and smoother and if it were chocolate it would be the kind with more milk and a lower percentage of cacao.  I  also found myself trying the Irish Murphy’s, Guinness’ primary rival in the stout department, to catch a bit of the bitter I’m more used to in my beer. 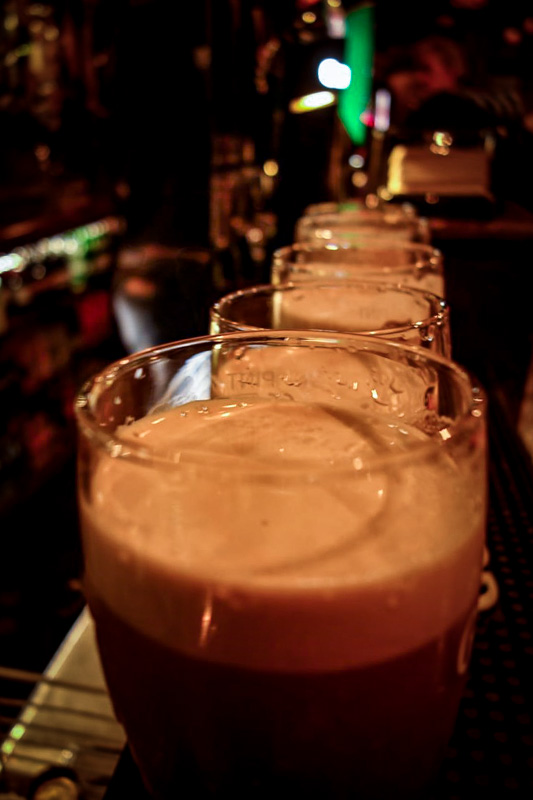 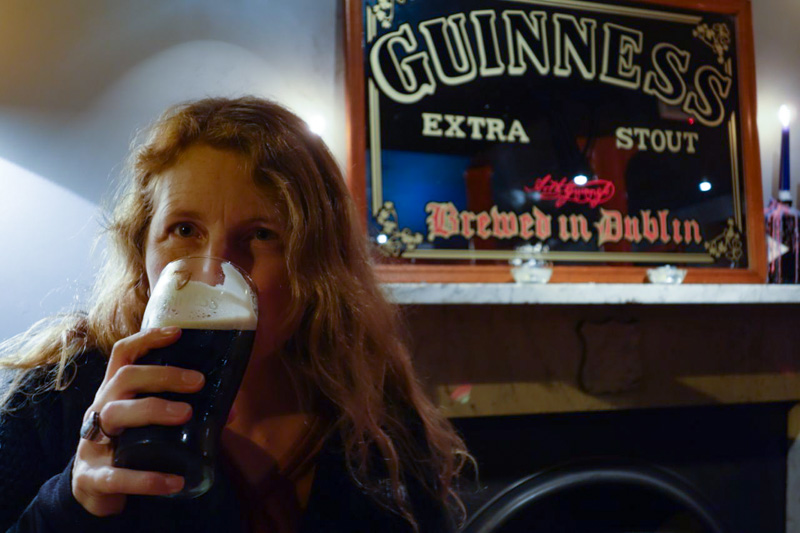 Aaron usually orders a pint of local goodness far lighter (think amber and hoppier) than mine, and when we’d order, the bartender would always say, “It’ll be a few minutes longer for the Guinness.”  The reason?  Guinness is poured from the tap about 3/4 full, sits for several minutes, then is topped off before being delivered to you.  The aeration starting from the bottom of the glass moves up taking its time like a cloud clearing on a warm afternoon.  Some of the old-timers in the bar would say that until not too long ago, Guinness was prescribed by doctors for a variety of ailments.  As the signs say, “Guinness is good for you” and “Guinness for Strength.” 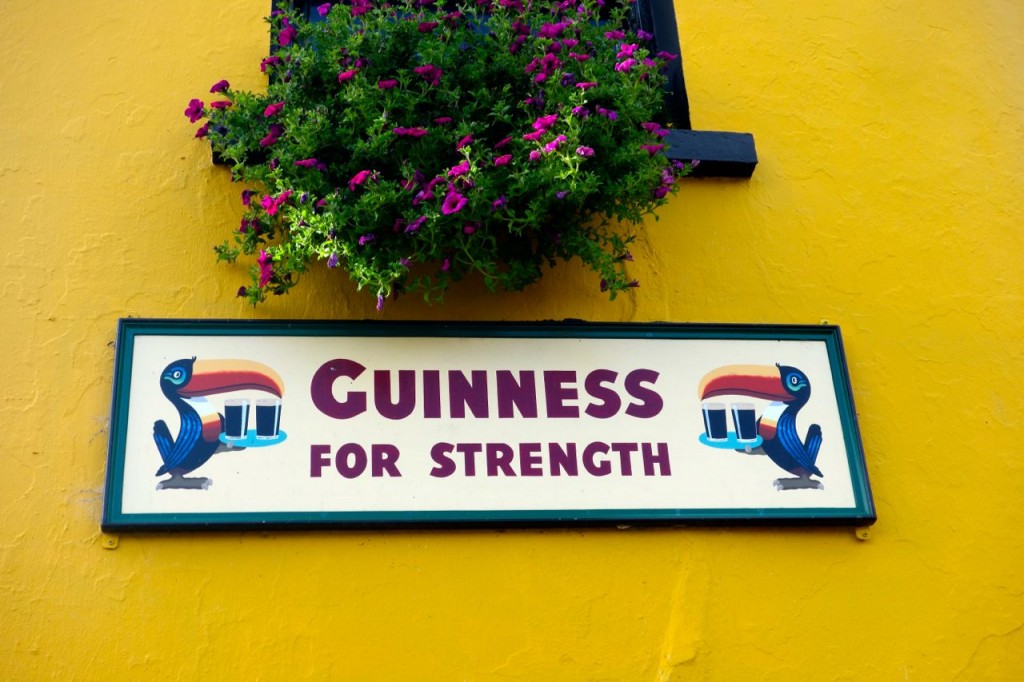 Ubiquitous sign – this one located on the outside of the Blind Piper, the pub in Derrynane in County Kerry

Ireland is a place like no other and one in which the stereotypes don’t seem  to disparage but rather increase its charm.  If you’re looking for the quintessential holiday that meets your expectations and are lucky enough to find yourself in Ireland, be sure to raise your glass to the luck of the Irish.

-written by Tammy, photographed by Tammy and Aaron