Staying Safe in Lands Remote: The Politics of Travel

A question that is often on people’s minds when we describe our journey is, “How do political events affect your travels?”

Some of the most interesting times we’ve experienced have been when there was a newsworthy event in the area where we were traveling.  Most of the time, incidents unfolded around us, and we were bystanders that were later surprised at the depiction of the event in the news.  Our family would get concerned about what they see in the media, but we have never felt in serious danger even though our adventures have been touched by political issues and terrorism.

At one time, we had hoped to cross Northern Algeria from Morocco to visit Tunisia, the home of ancient Carthaginians, and then continue across Libya to get to Egypt.  Unfortunately, Algeria is all but closed to Americans and a Westerner had been beheaded by radical Islamists at the time we were in Morocco.  We had an alternate plan to go to Tunisia by ferry from Sicily, but several recent attacks on Western tourists and the Tunisian government’s declaration of a State of Emergency ended those plans.  While we were visiting Cairo, there was an attempted bombing at the ancient temple of Karnak in Luxor where we were headed the following week. 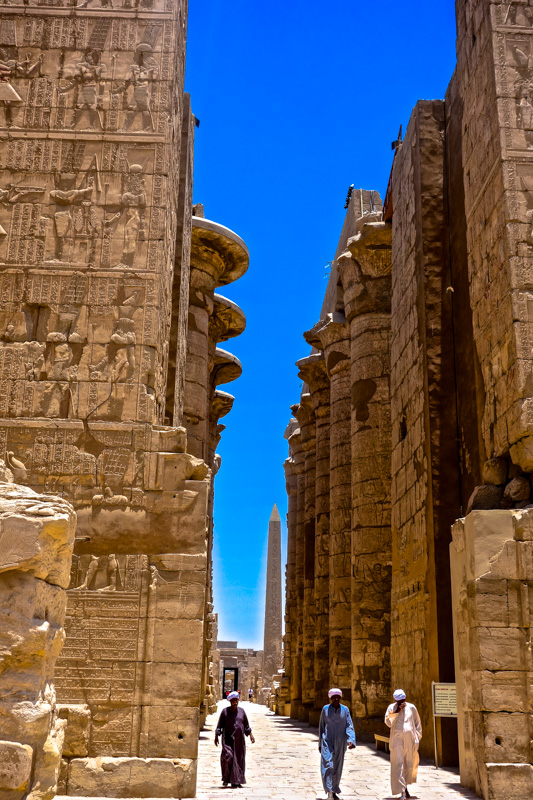 Karnak Temple in Luxor, Egypt where an attempted bombing was thwarted the week we arrived

In our earlier travels, we were in India during a holy war between the Muslims and the Hindus, where there was rioting, temples destroyed in on-going reprisals, and machine-gun toting soldiers everywhere.  Even in this situation, we were not present at any of the events, and after they happened, things are so well guarded and patrolled they were likely safer than at any other time.

Earlier in 2015, we were in Greece during the recent round of economic bailout discussions.  While it was in the news and on the lips of all around us, we were little affected.  We were always able to get money out of the cash machines despite government limits on citizens.  There were protests in Syntagma Square outside the Parliament Building in Athens, but other than an increased police presence, little affected us. 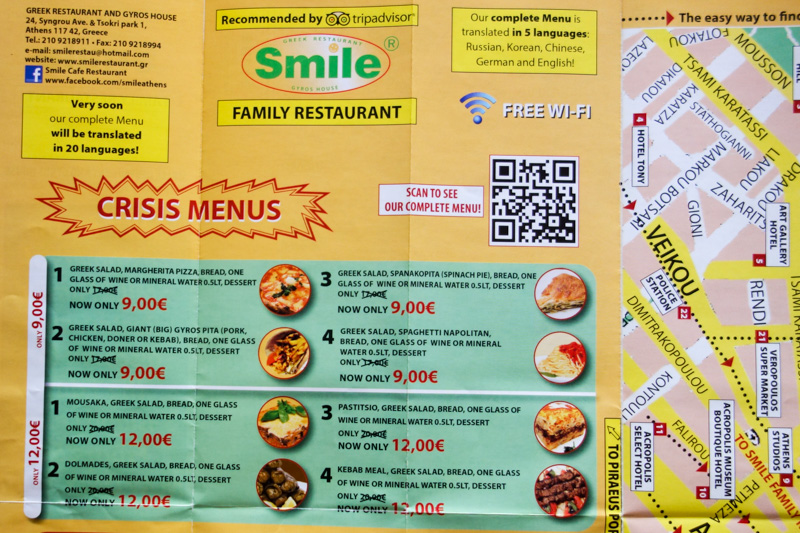 Similarly, during the summer of 2015, refugees from Syria and Iraq were making the news as waves of them were flowing over Balkan and Central European countries on their way North to better prospects.  We were crossing the borders at nearly the same time as these waves.  We chose quieter and smaller border crossings and never ran into trouble or saw any crowds.  It was a bit surreal to know all this was happening around us but not see much evidence of it.

Interestingly, the most vulnerable we have felt in our travels was staying in a campground near a soccer/football stadium during a game in Hungary.  Romania and Hungary are rival teams, and the police were out in force all over town all day.  As we returned from our day of sightseeing, we rode a the Budapest subway CRAMMED to the hilt with soccer fans.  They would break into boisterous song between gulps of beer as they made their way to the stadium.  After we retired to Charlie, the sound of sirens and helicopters were everywhere around us for hours throughout the night.  The next morning, we read that adversarial fans had been rioting and attacking each other and the police.  Who would have thought sport entertainment could be so dangerous? 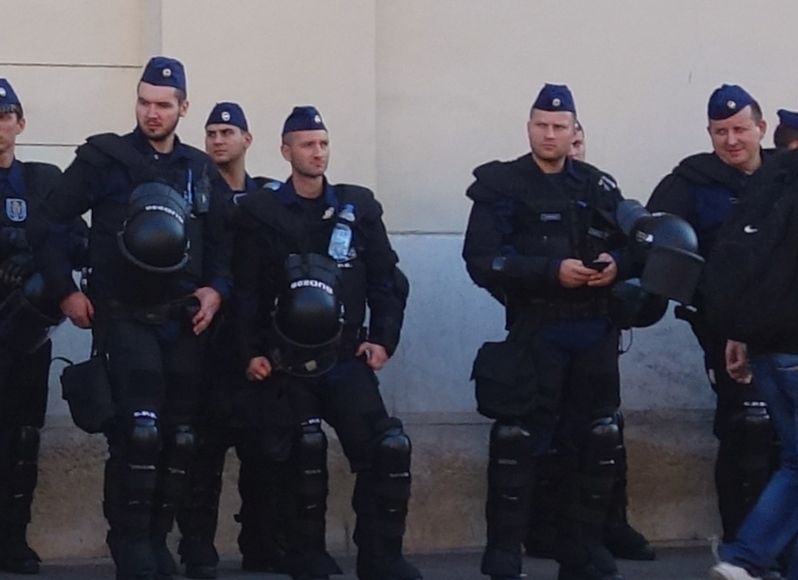 Hungarian riot police at the ready for football hooligans in Budapest

Our most recent touch with terror was just weeks ago.  We visited Paris for a glorious week of sunny leaf-falling days and woke a week later in Ireland hearing the devastating news of the terrorist attacks.  Questions poured into our mailbox asking whether we were affected or not.  Of course we were affected, the whole world was affected.  People might have expected these senseless acts could happen in Egypt more readily than Paris, but  when it happens in a place that has entered the hearts and dreams of millions, it is very disconcerting.

Is it Worth It?

This presence of danger gives one pause and makes you question the decision to visit a place.  Am I risking my life for this? Is it worth it?  I have to answer with an affirmative YES!  After those Paris attacks, we discussed whether we would still have gone if they had occurred before our visit, and our conclusion was that we would.

There is a lot at stake, but not just for me.  If we let radical factions of any persuasion dictate what we do, make us live in fear, they have already won and we are giving them what they want.

Egypt has taken a number of precautions to safeguard its country and its tourist sites.  The bombing in Luxor was actually prevented and no tourists were hurt.  The terrorists were forced to detonate their payloads before they reached their target because of Egyptian safety measures.  While it can be disconcerting to walk or drive past fortified checkpoints with armed guards, it is also reassuring to know that there are many safety precautions in place.  In Paris, the attack on the stadium during the soccer match was thwarted due to heavy security at such events.

To counter concerns about the safety of traveling, you also have to ask yourself another question.   Am I at any greater risk traveling in a place like Egypt than I am elsewhere in the world, even in my own country?  Since our travels began there have been a number of other incidences of random violence just within the US, though they are viewed differently because they are not “terrorist” related.   These include several movie theatre shootings, a mass shooting at a church, a school shooting in Oregon, a shooting incident at a Planned Parenthood in Colorado, and an “attack” on a facility for children with disabilities.  Interestingly, the last attack in Egypt prior to the recent foiled bomb attempt was before the Boston marathon bombing.

So I would ask you, will you not come to Egypt to see the wonders of the Ancient World because you might be hurt in a terrorist attack?  If so, then you better not go to the movies in the US either.  Or to Church.  Or to a medical facility.

President Obama addressed the nation in October 2015 after one of these incidents and provided some interesting statistics concerning Americans abroad.  Since 2001, the year of the World Trade Center attack, only 350 Americans have died abroad as a result of Terrorist violence.  This statistic was set against the more than 400,000 gun deaths in the United States (yes, in just the United States) during the same period.  Are you going to let the highly unlikely event of a terrorist attack keep you from traveling abroad when you are more likely to be killed by gun violence at home?

The worst part about the threat of terrorism is its effect on the people of a country.  We met many wonderful Egyptians who embody the Islamic principle of hospitality to strangers, who are charming and friendly, and helped us appreciate the wonders of their country and culture.  These are the people that suffer most. 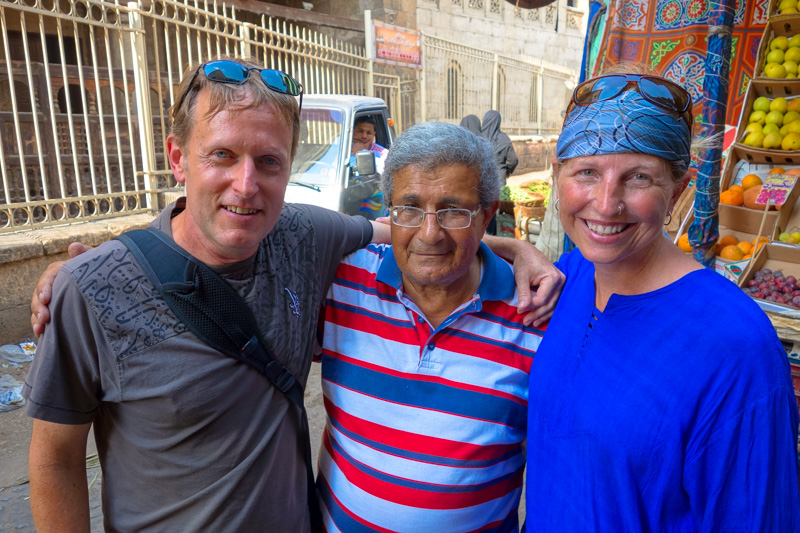 Hanging out with new friend and impromptu guide in Cairo, Egypt

Tourism in Egypt, which makes up 20% of their economy, is down by 2/3s.  In a country that already has serious economic challenges, this is devastating.  I wonder if Islamic radicals know the extent of the suffering they cause mainstream Muslims, and the way they turn their own people against them and weaken Islam through their actions. Do the majority of Muslims, who are good people and represent the true teachings of the Koran, want to stay associated with factions that attack their own people?  Do they want to join a group whose belief system brings suffering to them and their country?  Don’t let the terrorists win by making you fearful and keeping you from doing things you would otherwise want to do.

I believe in taking calculated risks, so while I would not venture to travel to certain parts of the Middle East at this time (e.g. Syria or the Sinai Peninsula), parts of Egypt are relatively safe and their people should not suffer because of the actions of an irrational minority.

There are ways to keep yourself safer also.  The United States Secretary of State’s Office has a web site that issues bulletins regularly on the dangers of travel in a number of countries.  You can also sign up to receive these in email.  Personally I feel they are overstated and a bit fear mongering, but I never-the-less check them before I visit a country of concern. They also have a registration program as well so you can let the State Department know where you are as you travel should there be some sort of emergency.

Before traveling and during my trip to a country of concern, I also do a search of world news with an eye out for headline stories from the past few months, and late-breaking stories. Again, I suggest a certain amount of skepticism of what appears in the media since their creed is “If it bleeds, it leads,” which means they are primed to present ANY event as dangerous to try and capture market share.

You should consider whether the event(s) pose any threat to you (Greek banking crisis and Syrian refugees did not), are likely to escalate or continue (they are part of an on-going problem that is getting worse), or is this just a random one-off event that could happen anywhere (mass shooting).  By keeping informed, you can track the threat level in a place, and if necessary, remove yourself from it if you feel things are dangerous or becoming increasingly so.

For Europe in general, these kinds of precautions are generally less necessary than they are in the United States due to our high violent crime rate.  Should you wish to venture further abroad, don’t let the fear mongering media determine whether you will travel or not.  By doing a bit of research and applying some common sense to the situation, you can travel safely in lands remote.

-written by Aaron and photographed by Tammy and a friendly stranger