You Can’t See it All: Why You Should Revisit Your Favorite Country in 2016 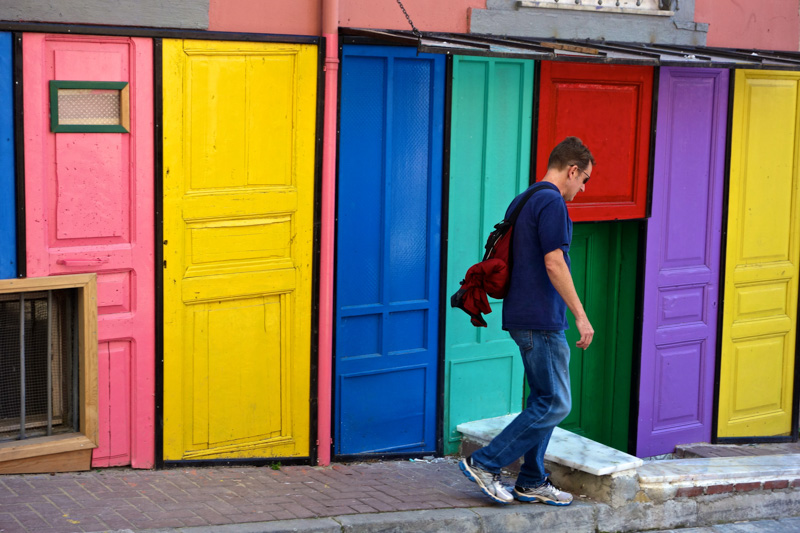 We always travel with the reminder that we can’t do or see it all.  That whatever we’re missing will have to wait until “another time”.  Often, this thought is tongue-in-cheek as we presume our travels won’t take us back to the incredible wetlands of the Pantanal in Brazil, or back to Komodo Island in Indonesia where we were chased by the dragons.  Yet on this journey, “another time” actually happened! We had the opportunity to deliberately revisit one of our favorite countries: Turkey.  What we learned has become an encouraging lesson of why you should revisit places you love.

With so many countries yet to be explored on our list, why did we return? Our intent was initially practical.  To A.) seek a place close to Greece to meet our friends-are-family the Richter de Medeiros family who were on their ‘Round the World Trip (see www.learnlivetravel.com) and B.) we all needed time out of the Schengen Visa countries.  We decided that Turkey was not only an amazing country, already known by us from a family trip in 2008, but that it would be affordable and has it’s own three month visa limit outside of the Schengen.  Sold!  What we didn’t count on was that revisiting a country in which we’d fallen in love with long ago gave us the unexpected opportunity of seeing it with new eyes. 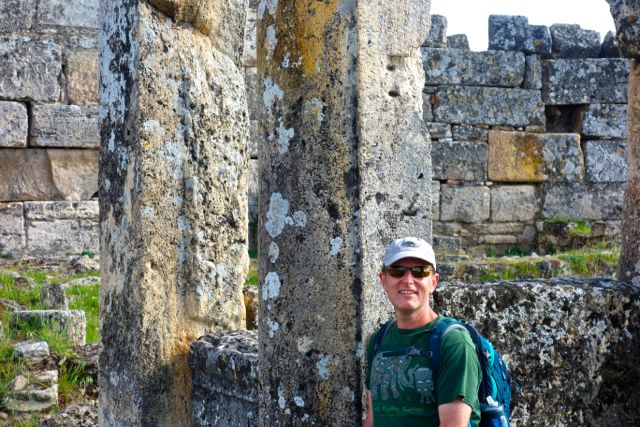 Aaron checking out the ruins in Hieropolis

Our previous trip to Turkey was as backpackers with a set itinerary relying on planes, and buses to get us from place to place: driving in Turkey was a whole new experience.  We crossed the Thracian border shared with Greece along with hundreds of semi-trucks waiting their turn at customs.  We strolled through customs but not without getting a special sticker on Aaron’s passport with a bar code identifying that we were bringing our own rig into Turkey, and therefore had to leave with it as well!  Revisiting a country allows you to relax your expectations of the “Must Sees” and “Don’t Miss” attractions and can spend your time on less popular (but no less fascinating) attractions.

The short ferry crossing at Canakkale was rough, but minutes later, our visit to Troia (the city of Troy famous for Helen) was well worth the acquired queasiness.  We had heard that Troy was just rubble, but found the layers of nine cities covered one on top of another for thousands of years was fascinating and sparked our imagination.  The newly-built wooden Trojan horse that dons the entrance to this UNESCO World Heritage Site is a bit hokey, but gives you a great sense of what the legend could have been like in reality.  Aaron and I played up the fun factor by photographing our favorite coffee Cowboy Mud by Lariat Coffee Roasters in the horse. 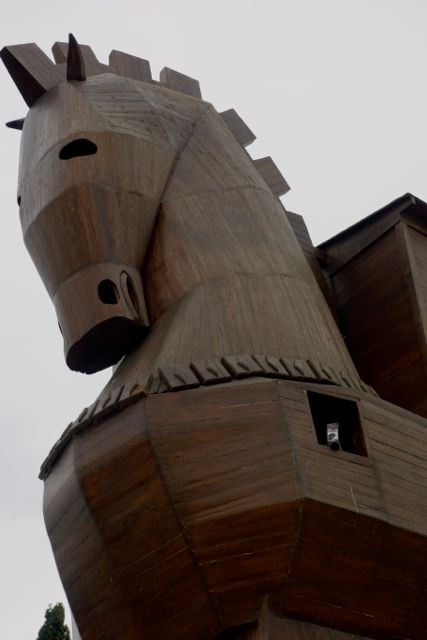 Lariat Coffee Roasters “Like a Sneak Attack on Your Brain”

Our next stop was the tiny towns of Behramkale and Assos where we explored the phenomenal Temple of Athena overlooking a multi-layered city of ruins below, and across the Aegean towards the Greek island of Lesbos.  Just weeks later this same area would be inundated with desperate Syrian refugees crossing the strait from Lesbos, but on this day the sea was calm and empty.  Aaron and I strolled along an ancient necropolis with sarcophagi missing their lids amidst a forum complete with a Stoa and walls reconstructed during some Medieval time made with repurposed Doric columns.  We were the sole visitors to this entire hillside ruins, joined only by local women in colorful garb picking wild herbs to sell. Our friends were waiting so we moved on, hoping to return some day and explore what we suspected was there.  We reminded ourselves yet again that we would have to wait to see more on our next visit. 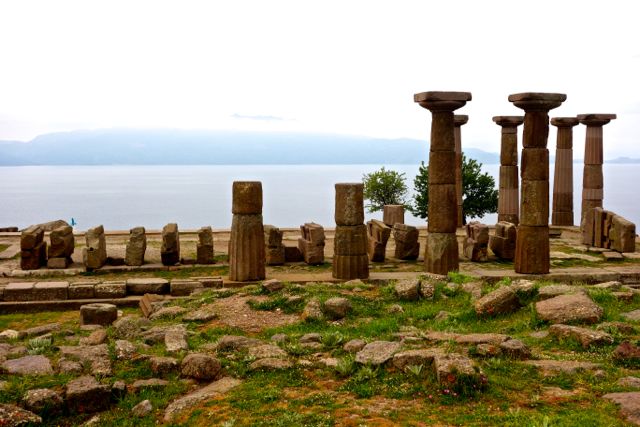 Temple of Athena with Lesbos in the background

The destination was a city we’d been to before but had yet to truly explore: the town of Selcuk is the closest settlement near the ancient ruins of Ephesus.  The Richter de Medeiros’ had secured a sweet rental house right in the old part of town with space for Charlie right out the garden door.  Seeing our loved ones again was so sweet.  We fell into our old routines of living and learning with each other within the context of traveling. 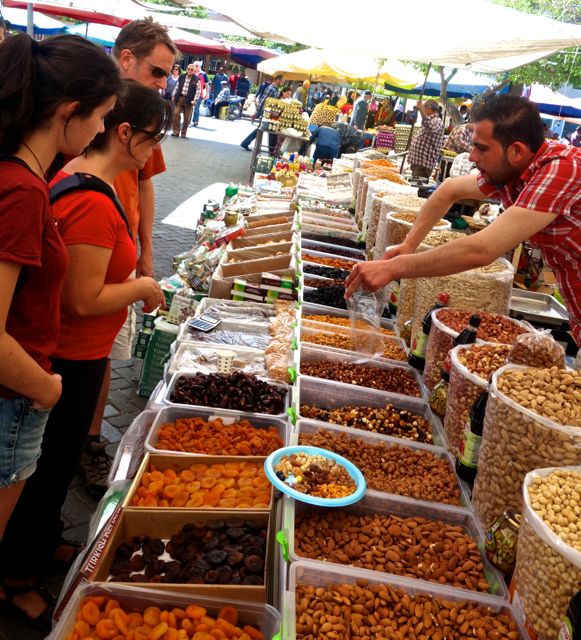 Isabella, Gretchen, and Aaron haggling a good deal on nuts and dried fruit in the Selcuk weekly market

Days in Selcuk were relaxed with leisurely breakfasts, wandering the weekly market stands, and highlighted by partaking of the amazing sites nearby such as St. John’s Basilica (where John the Apostle wrote part of the bible), Isa Bey Kamaii (old mosque), the Temple of Artemis, Meryem Ana (the last home of the Virgin Mary), and of course, the extensive ancient city of Ephesus.

While we had visited Ephesus before, our relaxed approach to slower travel allowed us to see it all with new eyes and enjoy it’s relevance even more. 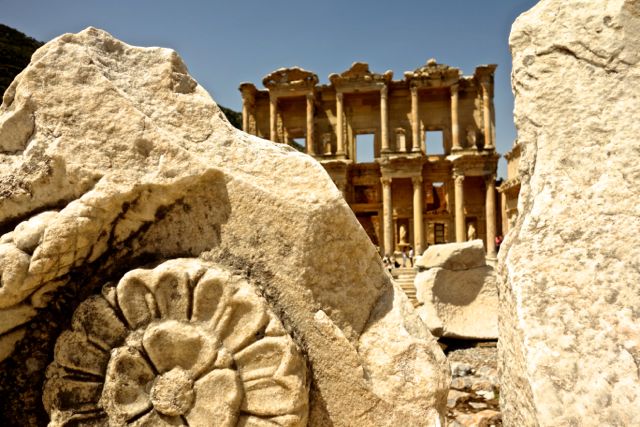 The amazing Celsus Library at Ephesus

A day trip to the cascading travertine pools of Pamukkale and ancient city of Hieropolis was truly a highlight.  Sharing the awe and wonder of this special place with our friends gave us a newfound appreciation for our choice to live as we do. 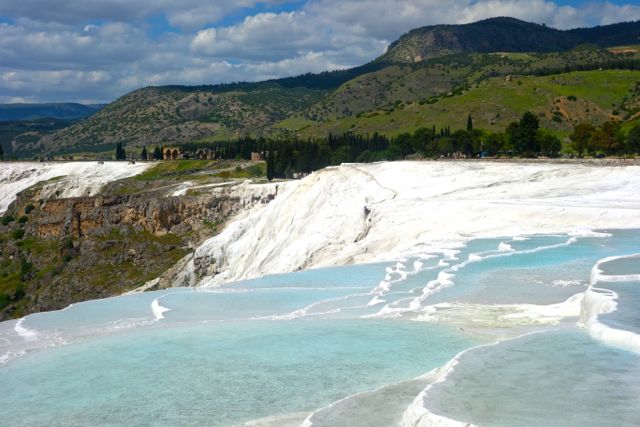 Travertine pools with the North Gate of Hieropolis on the left

The revisit to the mighty city of Istanbul allowed us to explore more. This time, we were to stay in all three major parts of the city: Uskudar on the Asian side, and on the European side Cemberlitas in the oldest part of the city, and Beyoglu, the relatively newer (medieval and modern) side across the Golden Horn.  It was tremendous fun to not only play “tour guide” to our favorite haunts, but to also feel like we didn’t have to see all the big sites again.  Instead, we took our time exploring less visited areas such as the orthodox Fethiye quarter and the Mosaic Museum, both which we thought were amazing.  We even spent time on the rubble wall that once surrounded ancient Constantinople.

Retracing our steps in Turkey nurtured reflection: what was the same, and what had changed in the seven years since we’d last been here? The people were equally as hospitable, the food continues to be good healthy fare, and the attractions were as glorious as we’d experienced before.  We found Istanbul to be as crowded as it felt before (16+ million people), and the air pollution was worse than we remembered.  The city also seemed smaller: we took public transportation and walked everywhere making it more “ours”. 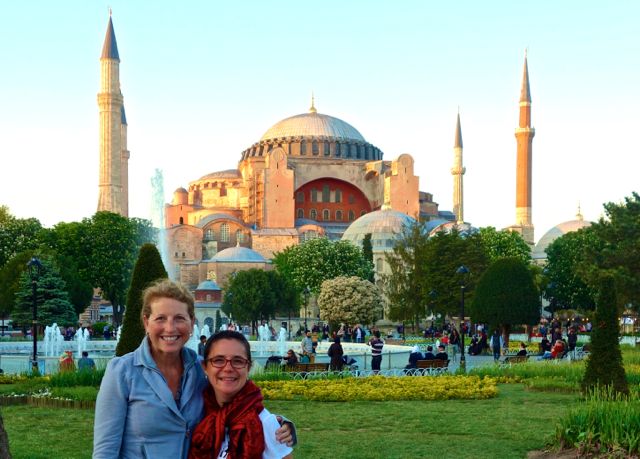 Our month in Turkey was all the richer because we were with people we love, and because we had been there before.  Revisiting Turkey felt like meeting an old friend: reliable yet no less interesting.  The sites we revisited had deeper context for us as we had new eyes and broader knowledge.

Would we go back?  You betcha!  Revisiting a remote land can strengthen your relationship with that place and provide you with opportunities to explore you might not take the first time around.

-written by Tammy, photographed by Tammy and Aaron